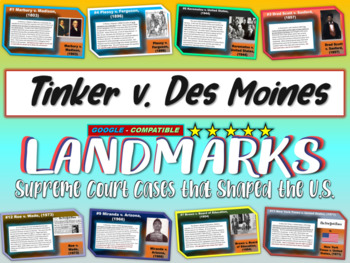 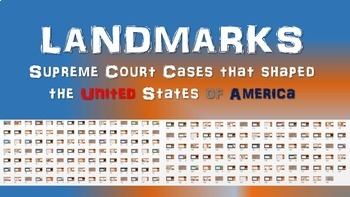 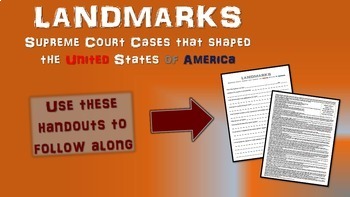 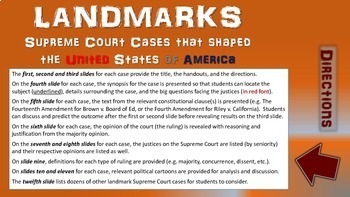 ***In order to address font compatibility issues, this resource now includes all slides in a standard font version (Calibri and Arial). The original version with calibri and AR Darling font is also still included.

This common-core aligned resource includes both a 12-slide PowerPoint AND and handouts in both PDF and MS WORD format. Students are presented with the background and details on a landmark supreme court case, then they are exposed to the related text from the U.S. Constitution, and then they are presented with the court's decision. The handout allows students to agree or disagree with the majority, and to analyze political cartoons related to the topic.

--- The handout is formatted to fit perfectly on two pages (or one paper, front and back) for easy copying and printing.
--- Page one includes a graphic organizer for students to analyze the case.
--- Page two includes relevant articles, sections, clauses, and amendments from the U.S. Constitution that relate to most landmark Supreme Court cases (e.g. article II, Amendments 1, 4, 14, etc.).
--- This allows students to analyze the documents and decide for themselves the constitutionality of each case.

The PowerPoint slides cover all the facts of the case...
--- The first, second and third slides for each case provide the title, the handouts, and the directions.
--- On the fourth slide for each case, the synopsis for the case is presented so that students can locate the subject (underlined), case details, and the big question facing the justices (in red font).
--- On the fifth slide for each case, the text from the relevant constitutional clause(s) is presented (e.g. The Fourteenth Amendment for Brown v. Board of Ed, or the Fourth Amendment for Riley v. California). Students can discuss and predict the outcome after the first or second slide before revealing results on the third slide.
--- On the sixth slide for each case, the opinion of the court (the ruling) is revealed with reasoning and justification from the majority opinion.
--- On the seventh and eighth slides for each case, the justices on the Supreme Court are listed (by seniority) and their respective opinions are listed as well.
--- On slide nine, definitions for each type of ruling are provided (e.g. majority, concurrence, dissent, etc.).
--- On slides ten and eleven for each case, relevant political cartoons are provided for analysis and discussion.
--- The twelfth slide lists dozens of other landmark Supreme Court cases for students to consider.

Other cases in this series include...

Enjoy!
Total Pages
12 slides and two handouts
Answer Key
N/A
Teaching Duration
1 hour
Report this Resource to TpT
Reported resources will be reviewed by our team. Report this resource to let us know if this resource violates TpT’s content guidelines.