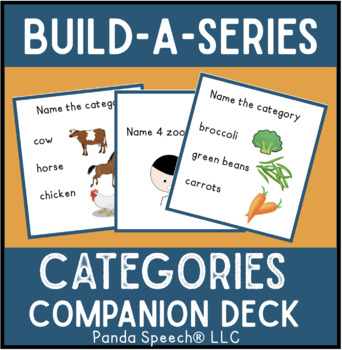 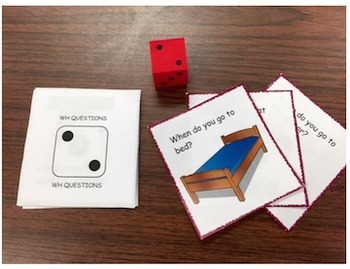 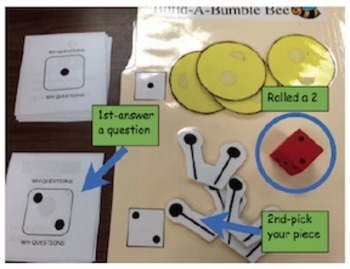 $1 Build-A-Series Categories Companion Deck
This card deck was created as a way to target categories while playing my
Build-A-Series games.
There are two types of cards:
★ Name that Category
★ Name items in ______Category.

Included: 66 Category cards and 6 Free Roll cards. Assembly: To assemble the cards,
print pages 2-25 front to back (the die will be on one side and the pictures on the other).
Cut out and laminate.

Ways to play:
Build A.... Series companion: Use this card deck while playing any of my Build A... games. Set up the game as directed and arrange
these cards in decks by the die number on the back. Have your students roll the die and answer questions from the corresponding deck. After each answer is given the student will choose the game piece that corresponds with the number rolled and put it on their building board. If the students gets a Free Roll card they get to put a piece on their board without having to answer a question.

Stand alone activity: You do not have to own a Build A.... game to use this card deck. Simply arrange the cards in decks by the die number. Have your student roll the die and then answer a question that corresponds with the number they rolled. If the students gets a Free Roll card they get to put a piece on their board without having to answer a question.

Terms of Use: Your purchase is a single user purchase. You may not copy or email this document to share. Additional licenses may be purchased at a reduced rate if you wish to share with co-workers.
Total Pages
26 pages
Answer Key
N/A
Teaching Duration
N/A
Report this Resource to TpT
Reported resources will be reviewed by our team. Report this resource to let us know if this resource violates TpT’s content guidelines.