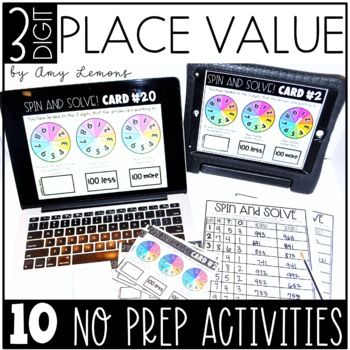 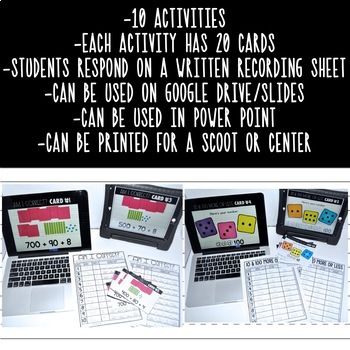 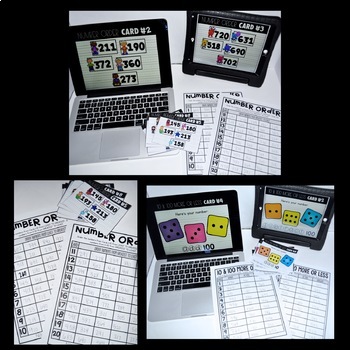 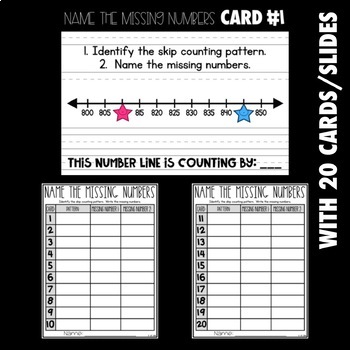 These TEN Place Value Activities are very versatile! They can be used digitally through Power Point or Google Slides. They can also be printed with very little prep-just cut into fourths and done! They can be used as an independent activity, center, or scoot... so many options! Students do not need any extra materials, manipulatives, etc to complete the activities. All of the activities are for THREE-DIGIT Numbers.

- Each activity comes with a printable recording sheet. Students respond with their answers in a handwritten format.

- The directions for each activity are clearly stated on the student recording sheets.

- If you are using the printable cards, they can be given to a small group, used as a scoot, or placed in a math center.

- If you are using the digital version, students pull up the slides on Power Point or Google Slides (video directions included), they use the slide to answer their questions on their recording sheets.

Here are the Ten Activities included:

- Emoji Numbers: Students use an Emoji Key to help them crack the code! Students find the 3 Digit Number and Write the Expanded Form

- Expand It!: Students are shown three playing cards. They rearrange the cards to create the greatest number possible. Then, students write the expanded form of their number.

- Name the Missing Numbers: Students are shown a number line that has a skip counting pattern. Students determine the two missing numbers by skip counting.

- Am I Correct?: Students are shown a set of base ten blocks and an expanded form. Students count the blocks to determine if the expanded form is correct!

- Number Order: Students are shown 5 3-Digit Numbers. Students arrange those numbers from Greatest to Least and Least to Greatest.

- What is Missing?: Students are shown a set of base ten blocks. Students have an expanded form for that number, but there is a piece missing! Students figure out which part is missing.

- What Number Am I? Students are shown a description of a number (either number word, how many hundreds, tens, and ones, or the expanded form) Students determine which number is being described!

Total Pages
275 pages
Answer Key
Not Included
Teaching Duration
N/A
Report this Resource to TpT
Reported resources will be reviewed by our team. Report this resource to let us know if this resource violates TpT’s content guidelines.