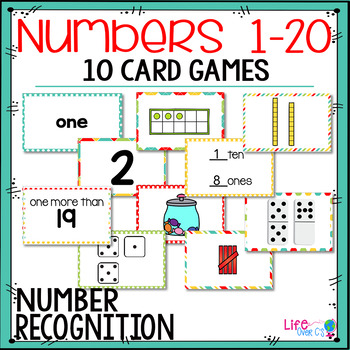 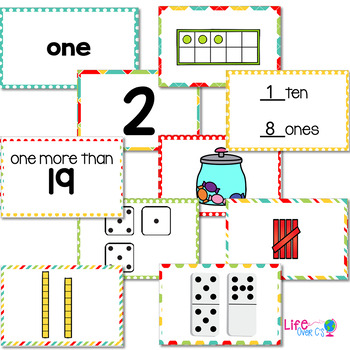 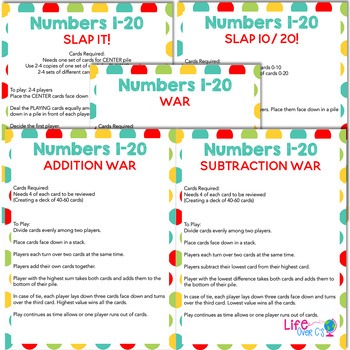 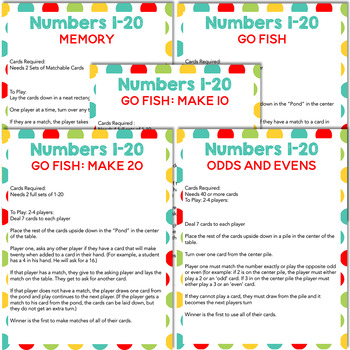 Students will love learning all about number sense for 1-20 with these 10 card games. They will learn to recognize numbers in ten different formats. Great for differentiation and review.

10 sets of cards for numbers 1-20 using the following formats:

These games are great for helping students with a large variety of number concepts such as:

In addition to providing them with lots of opportunities to use numbers in multiple formats.

Center instructions are included for the following games:

Play games for numbers 0-9 or 10 to start. Add other numbers as they are learned.

Print on card stock and/or laminate the cards. (Card stock is recommended because some children will try to see through the cards.) Laminating might be prohibitive due to the number of cards needed to create multiple decks/multiple games. If you cannot laminate, card stock is a MUST!

**Here is an example of the Slap-It! Directions:

Needs one set of cards for CENTER pile

Place the CENTER cards face down in a pile.

Deal the PLAYING cards equally among players. Place them face down in a pile in front of each player.

Flip over one of the CENTER cards.

In clockwise order players flip one card at a time. When a PLAYING card is flipped that matches the CENTER card: SLAP-IT!

The first player to slap the card takes the center pile of cards that have been played and adds them to the bottom of their own pile.

Game is finished when time is up or one player has all the PLAYING cards.

Check out some of the other great "War" Games I have available: