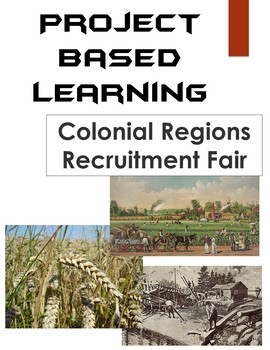 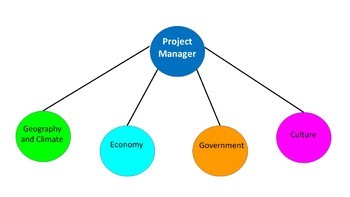 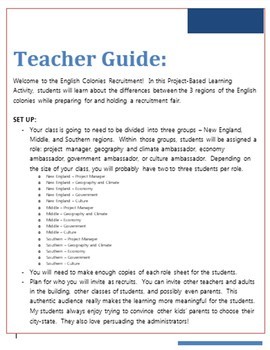 Welcome to the 13 Colonies Regional Recruitment Fair! In this PBL activity, students will learn about the differences between the three colonial regions while preparing for and holding a recruitment fair.

Students are divided into three groups - New England, Middle, and Southern. Within those groups, they are given roles; students will either be the project manager or an ambassador representing an area of life in their region. Students use various resources, including websites and textbooks, to research their assigned topic. They then plan for and create a booth that will be featured in the fair.

On fair day, you can invite administrators, specialists, teachers, students, and possibly even parents to visit the different booths. Students will use what they have learned about their region and their persuasive skills to convince the recent immigrants to settle in their region.

- Research worksheets for each role

Total Pages
48 pages
Answer Key
Included
Teaching Duration
2 Weeks
Report this Resource to TpT
Reported resources will be reviewed by our team. Report this resource to let us know if this resource violates TpT’s content guidelines.