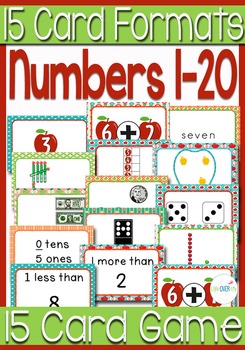 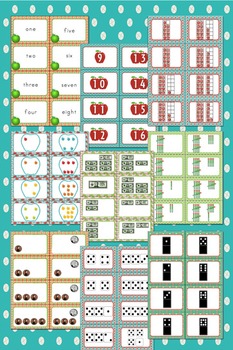 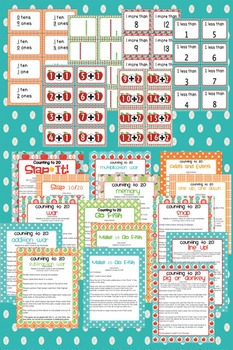 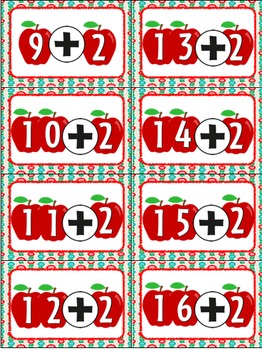 15 Card Games for Numbers to 20 with 10 Different Card Formats:

3) For "Line Up!" choose 5 numbers in sequence that students are struggling to recognize.

To play: 2-4 players
*Place the CENTER cards face down in a pile.
*Deal the PLAYING cards equally among players. Place them face down in a pile in front of each player.
*Decide the first player.
*Flip over one of the CENTER cards.
*In clockwise order players flip one card at a time. When a PLAYING card is flipped that matches the CENTER card: SLAP-IT!
*The first player to slap the card takes the center pile of cards that have been played and adds them to the bottom of their own pile.
*Flip another CENTER card and continue playing.
*Game is finished when time is up or one player has all the PLAYING cards.


Sample "Line Up!" instructions:
Needs one set of a five number sequence for each player.
Example: For 6 players you need 6 copies of numbers 1-5 (or any sequence of your choosing.) A group of 2-6 players is ideal. More players simply creates a longer game.

*Deal each player four cards.
*Each player holds their cards in their hand and decides what number they want to get to make 4 of a kind. Do not tell anyone.
*Each person chooses one card that they do not want and places it face down on the table. Then, everyone passes their card to the person on their left. They put it with the other cards.
*Players choose another card to pass. This continues until one person has four cards in a sequence. 1, 2, 3, 4 or 2, 3, 4, 5 would work if using numbers 1-5.
*When a player has a sequence they call out “Line Up!” and show their sequence. If they are correct, they are the winner. If it is incorrect, play resumes until someone else has a sequence to check.

Check out some of the other great games I have available:
Place Value War
Simple Addition Facts War

This work is licensed under a Creative Commons Attribution-NonCommercial-NoDerivs 3.0 Unported License.
Total Pages
64 pages
Answer Key
Included
Teaching Duration
Lifelong tool
Report this Resource to TpT
Reported resources will be reviewed by our team. Report this resource to let us know if this resource violates TpT’s content guidelines.