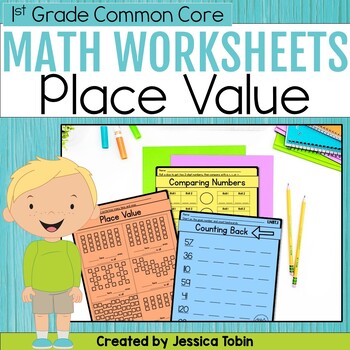 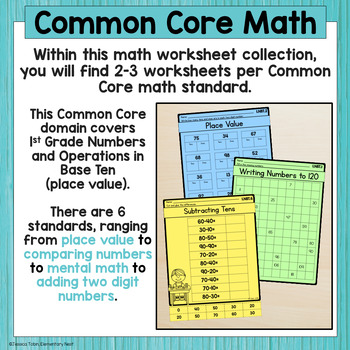 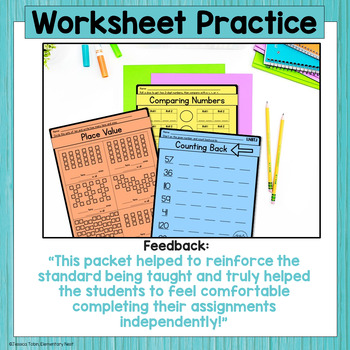 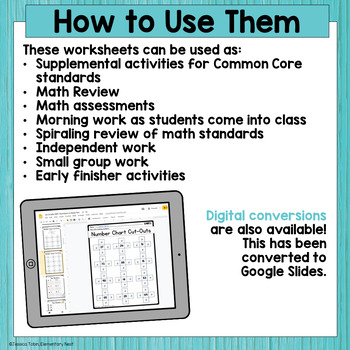 This NBT worksheet pack is a quick no-prep go-to resource to use when teaching numbers and operations in base-ten! This is not a curriculum, but a resource to help supplement your lessons! With printables for topics such as numbers to 120, teen numbers, understanding tens and ones, comparing two-digit numbers, adding double digit numbers to 100, ten more and ten less mental math, and subtracting tens.

*There is now a digital component included in this resource. The practice worksheets are now created in Google Slides. On page 4, you'll find a digital access link and instructions.*

This item aligns to the Common Core standards for the Numbers in Base-Ten domain, but you don't have to be a Common Core classroom to use this pack! There are TWO sets of sheets in this pack. One set has the CCSS tag (such as 1.NBT.2) and the other set comes without a tag for teachers who do not follow CCSS.

This item is included in a money-saving printables bundle.

You can save even more money when buying this item in a first grade common core bundle, which includes the printables bundle, plus short answer, centers, and interactive notebook templates.

If you're interested in sharing with other classrooms, make sure to buy the extra licenses for a discount through the TeachersPayTeachers tool. If you are interested in a site license, please contact me for a quote at jessica.L.tobin@gmail.com.