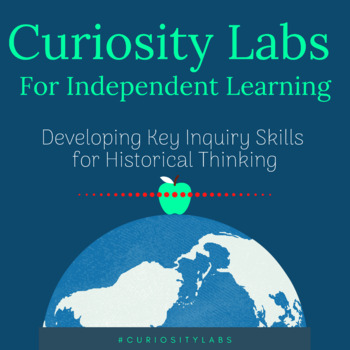 Curiosity Labs for Inquiry Based Learning are designed for:

b) thinking sequences that lend themselves to whole class discussion

c) inquiry in which the class builds knowledge together and where students play a central role in the learning process. (social constructivi)

The inquiry model presented in this download carefully draws out the innate curiosity and prior knowledge of each student, through the research based practices of activating prior knowledge, observation, the question formation technique, question selection and question categorization; this steps situate students to then choose their one burning question to research further. This is followed by corroboration of research and then synthesis of findings.

Questions and the desire to answer them give life to inquiry. Questions arise from students’ innate curiosity about the world and from their efforts to make sense of how that world works. Central to a rich social studies experience is the capability for developing questions that ca n frame and advance an inquiry. (from the C3 framework)

Inquiry All-Stars is classroom tested, contains therefor both the theoretical underpinnings of research based practice as well as design that caters to the 'reality' of the classroom teacher.

The Inquiry Arc comprises four areas: “one focused on questioning and inquiry; another on disciplinary knowledge and concepts relating to civics, economics, geography, and history; another on evaluating and using evidence; and a final one on communicating and taking action.” The basic idea is that students ask or are given compelling questions and then investigate those questions, evaluate and find evidence to answer them, and communicate their answers.'LINK

Stay TUNED FOR the following inquiry labs to be developed during the 2019-2020 school year !

Additionally, these inquiry questions will be explored in upcoming inquiry based learning labs: