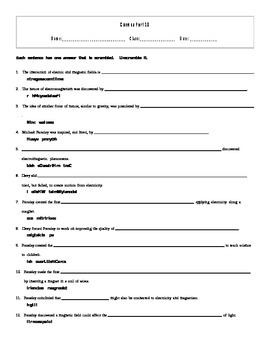 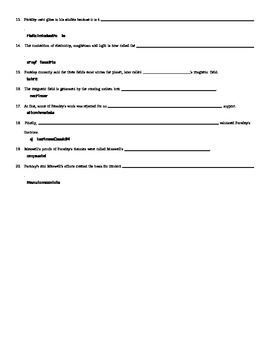 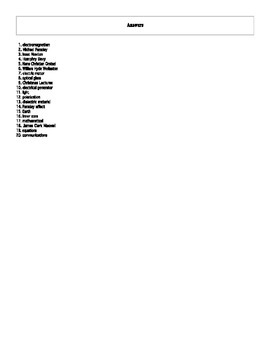 This 20 Answer Cosmos: A Spacetime Odyssey Episode 10 worksheet is designed to accompany Episode 10, The Electric Boy, of the documentary television series Cosmos: A Spacetime Odyssey hosted by Neil deGrasse Tyson and follows up Cosmos: A Personal Voyage presented by Carl Sagan. This episode provides an overview of the nature of electromagnetism, as discovered through the work of Michael Faraday. Tyson explains how the idea of another force of nature, similar to gravitational forces, had been postulated by Isaac Newton before. Tyson continues on Faraday, coming from poor beginnings, would end up becoming interested in studying electricity after reading books and seeing lectures by Humphry Davy at the Royal Institution. Davy would hire Faraday after seeing extensive notes he had taken to act as his secretary and lab assistant. After Davy and chemist William Hyde Wollaston unsuccessfully tried to build on Hans Christian Ørsted's discovery of the electromagnetic phenomena to harness the ability to create motion from electricity, Faraday was able to create his own device to create the first electric motor by applying electricity aligned along a magnet. Davy, bitter over Faraday's breakthrough, put Faraday on the task of improving the quality of high-quality optical glass, preventing Faraday from continuing his research. Faraday, undeterred, continued to work in the Royal Institution, and created the Christmas Lectures designed to teach science to children. Following Davy's death, Faraday returned to full time efforts studying electromagnetism, creating the first electrical generator by inserting a magnet in a coil of wires.
Tyson continues to note that despite losing some of his mental capacity, Faraday concluded that electricity and magnetism were connected by unseen fields, and postulated that light may also be tied to these forces. Using a sample of the optical glass that Davy had him make, Faraday discovered that an applied magnetic field could affect the polarization of light passing through the glass sample (a dielectric material), leading to what is called the Faraday effect and connecting these three forces. Faraday postulated that these fields existed across the planet, which would later by called Earth's magnetic field generated by the rotating molten iron inner core, as well as the phenomena that caused the planets to rotate around the sun. Faraday's work was initially rejected by the scientific community due to his lack of mathematical support, but James Clerk Maxwell would later come to rework Faraday's theories into the Maxwell's equations that validated Faraday's theories. Their combined efforts created the basis of science that drives the principles of modern communications today. Applies to science, astronomy, physics, history, chemistry, geology, physical science, communications and Earth science.
Total Pages
3 pages
Answer Key
Included
Teaching Duration
N/A
Report this Resource to TpT
Reported resources will be reviewed by our team. Report this resource to let us know if this resource violates TpT’s content guidelines.