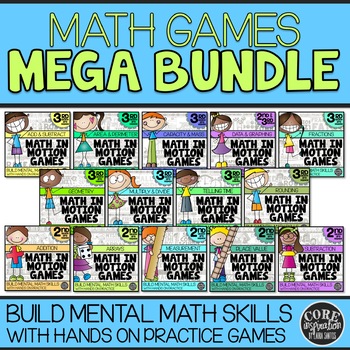 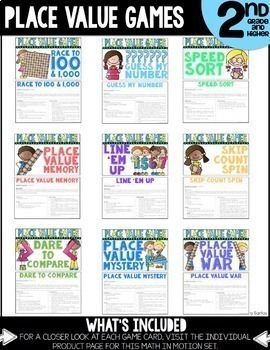 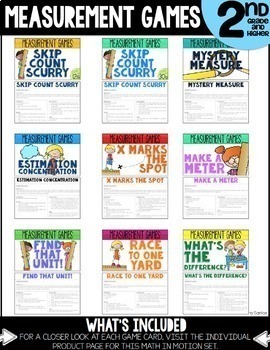 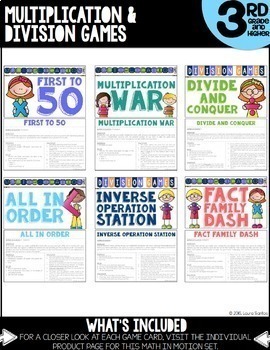 The 101 Math in Motion Games included in this year-long bundle are designed to help your students get hands-on math practice, and build a foundational understanding for these second and third grade math concepts:

★ Math In Motion Games are designed to boost engagement, and make math fun through friendly competition.

★ A few games have quick print-and-laminate game pieces that can be reused year after year.

★ Many games include movement, and are perfect for your active learners.

★ Both full-color and black-line masters are provided for your printing preferences.

A FORMAT THAT BOOSTS STUDENT INDEPENDENCE:

The format of each game card optimizes student independence with a consistent easy-to-read format that gives them every detail they need to play successfully. Each game cards includes:

★ Objective (a standards-based goal for each game, along with ideas for making the game more challenging)

★ Materials list (everything your students need to gather before playing)

★ How to play (student-friendly instructions for playing and winning)

No matter how you organize your math block, this resource makes it a breeze to incorporate hands-on math practice in your second grade classroom. Use these games for:

★ Partner work /math with someone

These games are also the perfect intervention/remediation tool for third and fourth graders who need extra practice to master second grade math skills.

★ Arrays On Display (focus on rows and columns while creating arrays)

★ Equal Shares Snatch (identify rectangles and circles that have been partitioned into halves, thirds, and fourths in different ways)

★ Find That Unit (create strong mental references of the length)

★ Estimation Concentration (estimate the length/height of an object)

★ Guess My Number (writing and reading numbers between 0-100)

★ Snap Minus (use mental math to subtract two numbers)

★ Around the Clock (minutes associated with each position on the clock)

★ Perimeter Puzzle (measure the perimeter of polygons using a ruler)

★ What's The Diffy? (create a rectangle with the least possible difference between the area and perimeter)

★ Who's In The Middle (compare fractions with the same numerator)

★ First to 50 (multiplication fact mastery, identification of odd and even numbers)

★ Around the Clock (minutes associated with each position on the clock)

★ Telling Time Dash (telling and modeling time to the minute)

★ Rapid Rounder (round numbers to the nearest 100)

★ Rounding Sort (round numbers to the nearest 10)

Log in
to see state-specific standards (only available in the US).
CCSSMP8
Look for and express regularity in repeated reasoning. Mathematically proficient students notice if calculations are repeated, and look both for general methods and for shortcuts. Upper elementary students might notice when dividing 25 by 11 that they are repeating the same calculations over and over again, and conclude they have a repeating decimal. By paying attention to the calculation of slope as they repeatedly check whether points are on the line through (1, 2) with slope 3, middle school students might abstract the equation (𝑦 – 2)/(𝑥 – 1) = 3. Noticing the regularity in the way terms cancel when expanding (𝑥 – 1)(𝑥 + 1), (𝑥 – 1)(𝑥² + 𝑥 + 1), and (𝑥 – 1)(𝑥³ + 𝑥² + 𝑥 + 1) might lead them to the general formula for the sum of a geometric series. As they work to solve a problem, mathematically proficient students maintain oversight of the process, while attending to the details. They continually evaluate the reasonableness of their intermediate results.
CCSSMP7
Look for and make use of structure. Mathematically proficient students look closely to discern a pattern or structure. Young students, for example, might notice that three and seven more is the same amount as seven and three more, or they may sort a collection of shapes according to how many sides the shapes have. Later, students will see 7 × 8 equals the well remembered 7 × 5 + 7 × 3, in preparation for learning about the distributive property. In the expression 𝑥² + 9𝑥 + 14, older students can see the 14 as 2 × 7 and the 9 as 2 + 7. They recognize the significance of an existing line in a geometric figure and can use the strategy of drawing an auxiliary line for solving problems. They also can step back for an overview and shift perspective. They can see complicated things, such as some algebraic expressions, as single objects or as being composed of several objects. For example, they can see 5 – 3(𝑥 – 𝑦)² as 5 minus a positive number times a square and use that to realize that its value cannot be more than 5 for any real numbers 𝑥 and 𝑦.
CCSSMP6
Attend to precision. Mathematically proficient students try to communicate precisely to others. They try to use clear definitions in discussion with others and in their own reasoning. They state the meaning of the symbols they choose, including using the equal sign consistently and appropriately. They are careful about specifying units of measure, and labeling axes to clarify the correspondence with quantities in a problem. They calculate accurately and efficiently, express numerical answers with a degree of precision appropriate for the problem context. In the elementary grades, students give carefully formulated explanations to each other. By the time they reach high school they have learned to examine claims and make explicit use of definitions.
CCSSMP5
Use appropriate tools strategically. Mathematically proficient students consider the available tools when solving a mathematical problem. These tools might include pencil and paper, concrete models, a ruler, a protractor, a calculator, a spreadsheet, a computer algebra system, a statistical package, or dynamic geometry software. Proficient students are sufficiently familiar with tools appropriate for their grade or course to make sound decisions about when each of these tools might be helpful, recognizing both the insight to be gained and their limitations. For example, mathematically proficient high school students analyze graphs of functions and solutions generated using a graphing calculator. They detect possible errors by strategically using estimation and other mathematical knowledge. When making mathematical models, they know that technology can enable them to visualize the results of varying assumptions, explore consequences, and compare predictions with data. Mathematically proficient students at various grade levels are able to identify relevant external mathematical resources, such as digital content located on a website, and use them to pose or solve problems. They are able to use technological tools to explore and deepen their understanding of concepts.
CCSSMP4
Model with mathematics. Mathematically proficient students can apply the mathematics they know to solve problems arising in everyday life, society, and the workplace. In early grades, this might be as simple as writing an addition equation to describe a situation. In middle grades, a student might apply proportional reasoning to plan a school event or analyze a problem in the community. By high school, a student might use geometry to solve a design problem or use a function to describe how one quantity of interest depends on another. Mathematically proficient students who can apply what they know are comfortable making assumptions and approximations to simplify a complicated situation, realizing that these may need revision later. They are able to identify important quantities in a practical situation and map their relationships using such tools as diagrams, two-way tables, graphs, flowcharts and formulas. They can analyze those relationships mathematically to draw conclusions. They routinely interpret their mathematical results in the context of the situation and reflect on whether the results make sense, possibly improving the model if it has not served its purpose.