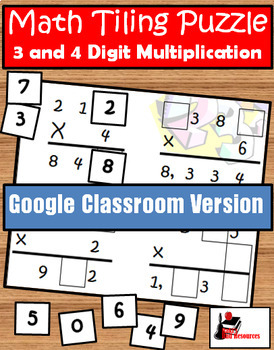 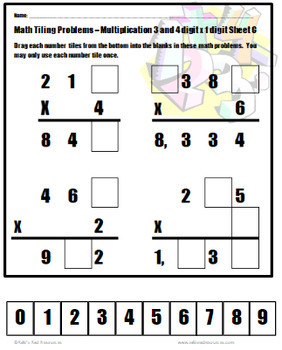 Are you looking for a creative new way to have your students practice multiplication? Try Tiling! In Tiling activities, students will use the provided "digit tiles" to place the numbers 0 - 9 to fill in the holes left in provided multiplication equations. While trying to figure out where the missing numbers go, students will work on basic facts, properties of multiplication and problem solving skills. Simple and easy to use as a homework assignment or a math center.

Using this digital version, students can drag the number tiles into the blanks without moving the puzzle itself. This version can be assigned directly to your Google Classroom. Answer Keys included. This puzzle is also available in my store in a PDF printable version. This is just one puzzle, which will ALWAYS remain FREE. Find a pack of 10 puzzles like this by clicking HERE .

Log in
to see state-specific standards (only available in the US).
CCSS4.OA.A.1
Interpret a multiplication equation as a comparison, e.g., interpret 35 = 5 × 7 as a statement that 35 is 5 times as many as 7 and 7 times as many as 5. Represent verbal statements of multiplicative comparisons as multiplication equations.
CCSS4.OA.A.2
Multiply or divide to solve word problems involving multiplicative comparison, e.g., by using drawings and equations with a symbol for the unknown number to represent the problem, distinguishing multiplicative comparison from additive comparison.
CCSS6.NS.B.2
Fluently divide multi-digit numbers using the standard algorithm.
CCSS6.NS.B.3
Fluently add, subtract, multiply, and divide multi-digit decimals using the standard algorithm for each operation.
CCSS4.NBT.B.5
Multiply a whole number of up to four digits by a one-digit whole number, and multiply two two-digit numbers, using strategies based on place value and the properties of operations. Illustrate and explain the calculation by using equations, rectangular arrays, and/or area models.