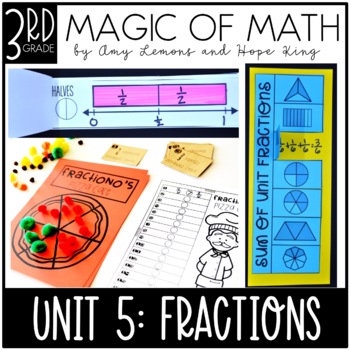 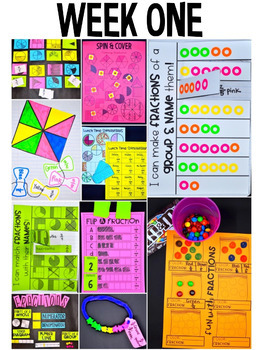 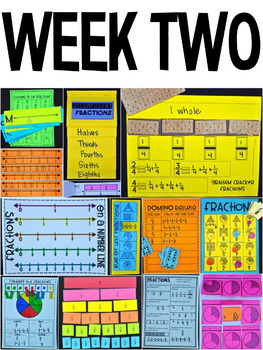 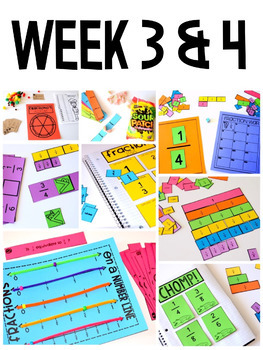 The Magic Of Math Unit 5 for THIRD GRADE focuses on:

Here is what is included in this month long unit for 3rd grade:

-Aligned with the 3rd Grade Common Core and TEKS

-20 Word Problems for each day that complement the skills

Want a Closer Look? Here are some (not all!) activities included:

- Posters for Numerators and Denominators

- Parts of a Group Poster

- Parts of a Group Bracelets

- Fun with Fractions: using M&Ms to show parts of a group

- Fractions on a Number Line Templates

- My Fraction Booklet for number line

- Missing Fractions on a Number Line

- Zooming in on Number Lines: Finding the fraction

- Fractions with Candy- finding the sum of unit fractions

What is the Magic of Math?

The Magic of Math is a series of math lesson plans and activities that can be used as your math curriculum or as a supplement to the program that you are already using. We provide the daily lesson plans, word problem, mini-lesson, activity, and interactive notebook entries for four weeks at a time. If you don't have time for it all, that's okay too! You can just pick and choose the pieces that you want to incorporate into your math block!

Are these activities repeats from other units you have?

Absolutely NOT! We create all new activities for each Magic of Math unit. They are all unique to this purchase and are not copy/pasted from things we have previously made.

What is the difference between Magic of Math and other units you have?

Magic of Math is organized as daily lesson plans with everything you need rather than just activities.

WHAT IT IS NOT:

It is NOT a collection of worksheets. You will not find any worksheets in this series. Instead we use games, hands-on activities, engaging mini-lessons, and interactive notebooks to build our curriculum. We do try to keep in mind the amount of prep that is involved with the lessons, but some things will need to be printed, cut, and put together to use in your classroom.

Want to know more about Magic of Math?  You can find a blog post about it HERE!

Check out all 3rd Grade Math Units Below: