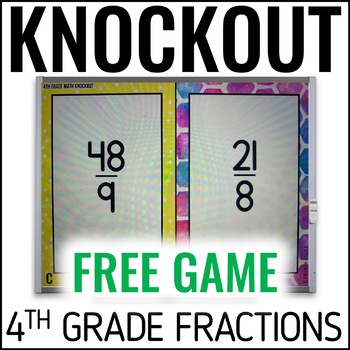 This quick-paced, nail-biter of a free 4th grade fractions game will leave your kids BEGGING for more! Team up to knock out the other team's player. The last team standing wins! This is by far the most engaging thing I've done for my classroom this year. My kids get SO excited when we play, and they work super hard all week practicing math skills just so they can improve their Knockout™ game!

Not only is this GREAT for learning about fractions, but it builds character as it emphasizes teamwork and good sportsmanship.

The team with players standing at the end of the game wins.

This game is a free sample from the 4th Grade Fraction Knockout pack that includes 15 other games.

*****Purchase them ALL TOGETHER in a growing bundle: MEGA BUNDLE!*****

Log in to see state-specific standards (only available in the US).
CCSS4.NF.B.4a
Understand a fraction 𝘢/𝘣 as a multiple of 1/𝘣. For example, use a visual fraction model to represent 5/4 as the product 5 × (1/4), recording the conclusion by the equation 5/4 = 5 × (1/4).
CCSS4.NF.B.3c
Add and subtract mixed numbers with like denominators, e.g., by replacing each mixed number with an equivalent fraction, and/or by using properties of operations and the relationship between addition and subtraction.
Total Pages
40 pages
Answer Key
Included
Teaching Duration
N/A
Report this Resource to TpT
Reported resources will be reviewed by our team. Report this resource to let us know if this resource violates TpT’s content guidelines.