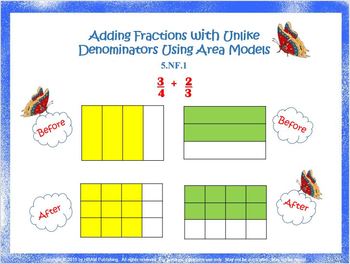 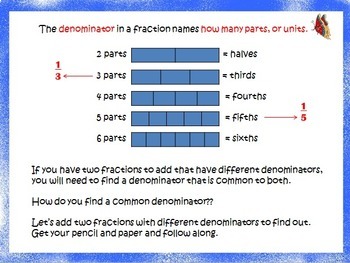 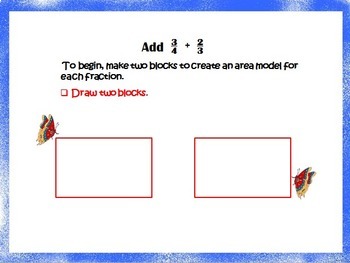 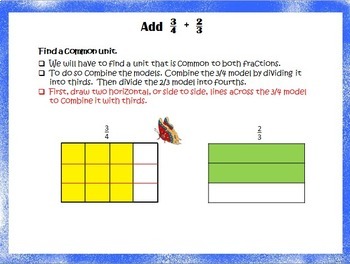 75 Followers
Follow
More products from joi9000
$8.50
Digital Download
Report this resource to TpT
You and your students will enjoy this PPT lesson! It's an Adding Fractions with Unlike Denominators Made Easy lesson. The multiple steps involved are demonstrated one step at a time using area models. This method makes the process easy to understand, plus a worksheet is included for practice.

Student involvement occurs throughout the lesson. They should have paper and pencil ready. The PPT begins with a visual demonstration of the necessity of having like units in order to add numbers. Then a problem is solved through modeling that ask students to re-create each step on notebook paper. Students will next do a Guided Practice with immediate fly-ins feedback after each step.

The visual demonstration with student re-creation leads to better comprehension. Your students will feel proud of themselves when they see that they UNDERSTAND and CAN USE this strategy to add fractions with unlike denominators. A practice worksheet is also included that can be used to your liking.

Get this popular PPT for FREE when you get my Common Core Fractions Bundle. You'll get three fractions teaching lessons, 5.NF.1, 5.NF.3, and 5.NF.5, for the price of two:

Be sure to check out these popular Common Core Math Multiplying Decimals PPT lessons in my store:

Get all three in a bundle and SAVE!


Log in
to see state-specific standards (only available in the US).
CCSS5.NF.A.1
Add and subtract fractions with unlike denominators (including mixed numbers) by replacing given fractions with equivalent fractions in such a way as to produce an equivalent sum or difference of fractions with like denominators. For example, 2/3 + 5/4 = 8/12 + 15/12 = 23/12. (In general, 𝘢/𝘣 + 𝘤/𝘥 = (𝘢𝘥 + 𝘣𝘤)/𝘣𝘥.)
Total Pages
38 pages
Answer Key
Included
Teaching Duration
50 minutes
Report this Resource to TpT
Reported resources will be reviewed by our team. Report this resource to let us know if this resource violates TpT’s content guidelines.