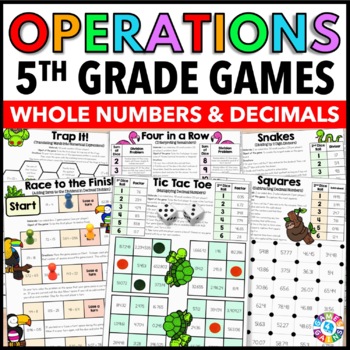 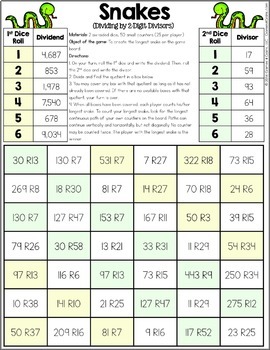 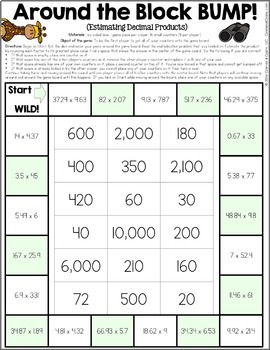 • Multiplying 3- and 4-Digit by 2-Digit Numbers

• Finding the Unknown in Decimal Addition and Subtraction

• Multiplying Decimals with Zeros in the Product

• Adding Zeros to the Dividend in Decimal Division

• Finding the Unknown in Decimal Multiplication and Division

• Evaluating Expressions with 3 or More Operations

These games are so simple to use and require very minimal prep - just print, grab some basic materials, and play! They are perfect to use in math centers or as extension activities when students complete their work!

• Answer keys for all of the games

Want to learn more about the games included? Check out the preview file above.

Leave feedback to earn credit points to save money on future products!

This work is licensed under a Creative Commons Attribution-NonCommercial-NoDerivatives 4.0 International License.

Log in
to see state-specific standards (only available in the US).
CCSS5.OA.A.2
Write simple expressions that record calculations with numbers, and interpret numerical expressions without evaluating them. For example, express the calculation “add 8 and 7, then multiply by 2” as 2 × (8 + 7). Recognize that 3 × (18932 + 921) is three times as large as 18932 + 921, without having to calculate the indicated sum or product.
CCSS5.OA.A.1
Use parentheses, brackets, or braces in numerical expressions, and evaluate expressions with these symbols.
CCSS5.NBT.B.7
Add, subtract, multiply, and divide decimals to hundredths, using concrete models or drawings and strategies based on place value, properties of operations, and/or the relationship between addition and subtraction; relate the strategy to a written method and explain the reasoning used.
CCSS5.NBT.B.6
Find whole-number quotients of whole numbers with up to four-digit dividends and two-digit divisors, using strategies based on place value, the properties of operations, and/or the relationship between multiplication and division. Illustrate and explain the calculation by using equations, rectangular arrays, and/or area models.
CCSS5.NBT.B.5
Fluently multiply multi-digit whole numbers using the standard algorithm.