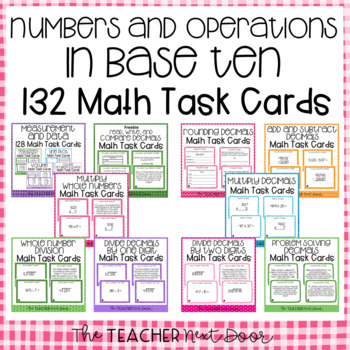 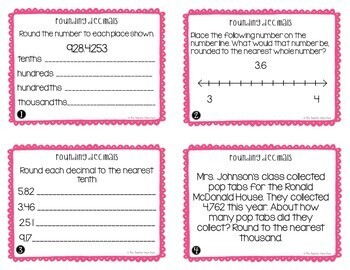 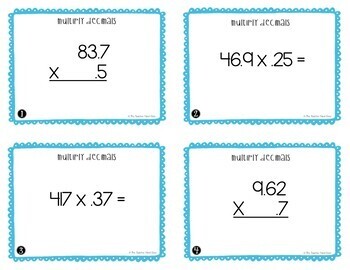 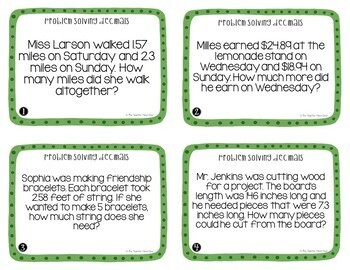 Here’s what it includes:

Record Sheet for each set

Answer Key for each set

Self-Checking Answer Sheets for Each Set

Here are the topics included if you'd like to look at each in more detail:

SAVE MORE and GET MORE with the 5th Grade Mega Bundle Math Task Cards!!! It has 30 sets of task cards which cover ALL 5th grade standards for the ENTIRE YEAR!!! (Click Here)

Why you'll love this resource:

If you'd like to take a look at each set included in the 30 set 5th Grade Math Task Cards Mega Bundle in more detail, here they are:

Other 5th grade units included in the Mega Bundle but also sold separately include:

Looking for other year long resources for 5th grade?

Finally, if you like my work, I would love for you to follow me by clicking on the green star above.

©The Teacher Next Door™

Purchasing this product grants permission for use by one teacher in his or her own classroom or for one homeschool parent teaching his/her child. If you would like to share with others, please purchase additional licenses.

Log in
to see state-specific standards (only available in the US).
CCSS5.NBT.B.7
Add, subtract, multiply, and divide decimals to hundredths, using concrete models or drawings and strategies based on place value, properties of operations, and/or the relationship between addition and subtraction; relate the strategy to a written method and explain the reasoning used.
CCSS5.NBT.B.6
Find whole-number quotients of whole numbers with up to four-digit dividends and two-digit divisors, using strategies based on place value, the properties of operations, and/or the relationship between multiplication and division. Illustrate and explain the calculation by using equations, rectangular arrays, and/or area models.
CCSS5.NBT.B.5
Fluently multiply multi-digit whole numbers using the standard algorithm.
CCSS5.NBT.A.4
Use place value understanding to round decimals to any place.
CCSS5.NBT.A.3
Read, write, and compare decimals to thousandths.