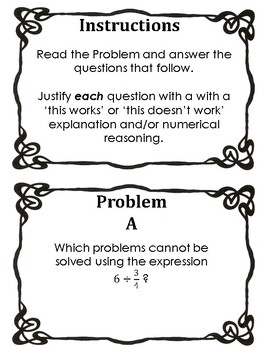 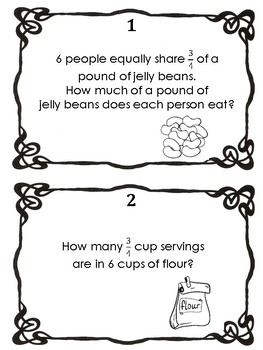 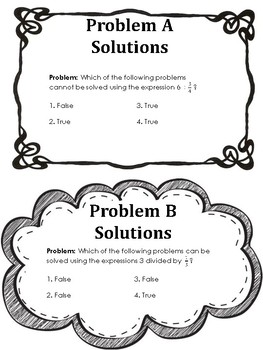 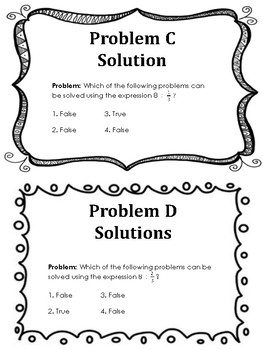 (865 KB|15 pages)
Standards
CCSSMP1
CCSS6.NS.A.1
This is a strategic problem solving activity that can be conducted in groups. I performed this as a carousel activity and visited the groups to join in on their fruitful discussion.

When we are working on problem solving, it's important for students to correctly identify the operation and apply it correctly to the given figures. When fractions come into the picture, this can become confusing. One strategy students found helpful was to substitute the story with whole numbers to develop the number sentence. Also, it's useful for students to write out the number sentence for each option first and then look at the problem.

It's easier to share an example, I've included how I would discuss with students below:

Problem: Which of the following problems can be solved using the expressions 3 divided by 1/3 ?

Option 1: 3 people equally share 1/3 of pizza. How much pizza does each person eat?
Solution: False
Discussion Point – Each is sharing part of the pizza, one-third of the whole pie that is. So the division story would be one-third divided by one-third. Each person would have one-ninth of the whole pie.

Option 4: How many 1/3 lbs of bacon can you get from a 3 lb package?
Solution: True
Discussion Point – If we are splitting up a three pound packet of bacon, we want to know how many groups of one-third pounds there are in the three pounds. Therefore, it would be three divided by one-third, and there would be nine segments of the whole package that are one-third pounds each.

Log in to see state-specific standards (only available in the US).
CCSSMP1
Make sense of problems and persevere in solving them. Mathematically proficient students start by explaining to themselves the meaning of a problem and looking for entry points to its solution. They analyze givens, constraints, relationships, and goals. They make conjectures about the form and meaning of the solution and plan a solution pathway rather than simply jumping into a solution attempt. They consider analogous problems, and try special cases and simpler forms of the original problem in order to gain insight into its solution. They monitor and evaluate their progress and change course if necessary. Older students might, depending on the context of the problem, transform algebraic expressions or change the viewing window on their graphing calculator to get the information they need. Mathematically proficient students can explain correspondences between equations, verbal descriptions, tables, and graphs or draw diagrams of important features and relationships, graph data, and search for regularity or trends. Younger students might rely on using concrete objects or pictures to help conceptualize and solve a problem. Mathematically proficient students check their answers to problems using a different method, and they continually ask themselves, "Does this make sense?" They can understand the approaches of others to solving complex problems and identify correspondences between different approaches.
CCSS6.NS.A.1
Interpret and compute quotients of fractions, and solve word problems involving division of fractions by fractions, e.g., by using visual fraction models and equations to represent the problem. For example, create a story context for (2/3) ÷ (3/4) and use a visual fraction model to show the quotient; use the relationship between multiplication and division to explain that (2/3) ÷ (3/4) = 8/9 because 3/4 of 8/9 is 2/3. (In general, (𝘢/𝘣) ÷ (𝘤/𝘥) = 𝘢𝘥/𝘣𝘤.) How much chocolate will each person get if 3 people share 1/2 lb of chocolate equally? How many 3/4-cup servings are in 2/3 of a cup of yogurt? How wide is a rectangular strip of land with length 3/4 mi and area 1/2 square mi?
Total Pages
15 pages
Answer Key
Included
Teaching Duration
N/A
Report this Resource to TpT
Reported resources will be reviewed by our team. Report this resource to let us know if this resource violates TpT’s content guidelines.

Jessica at The Pointy Pencil

191 Followers
Follow
More products from Jessica at The Pointy Pencil