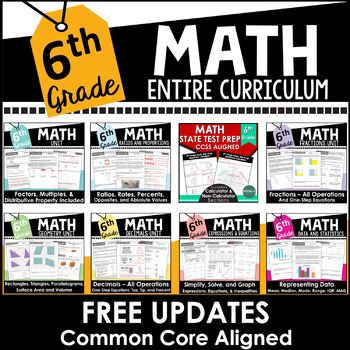 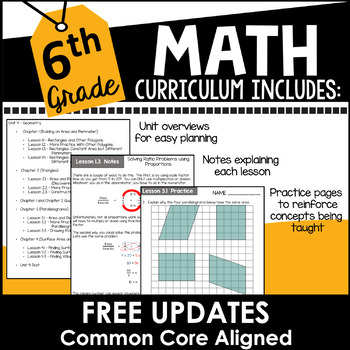 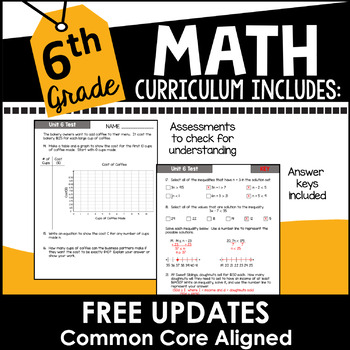 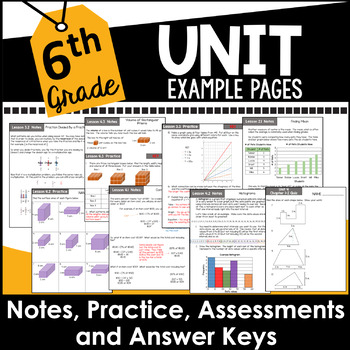 Do you teach 6th grade? Are you looking for a new math curriculum? Well, you are in luck. In this 6th grade math NO PREP product you get 8 complete units. This common core aligned product will engage your sixth grade students for an entire year. All you have to do is print these for your students and start teaching. This unit is exactly what you need to teach the CCSS in your classroom. All lesson focus on specific standards with notes to introduce the topic, practice pages to reinforce what was taught, and answer keys to make discussions and grading easy.

Use the bookmarks inside of each pdf to make navigating easier.

6th Grade Test Prep Contain a Variety of Questions That Include:

• Fill in the blank

There are tests and quizzes for each Unit. There are study guides for each quiz and test as well.

There is also an End of the Year review activity that goes along with this unit.

This is the same curriculum as 6th Grade Math Curriculum Bundle Common Core Aligned Using Google except this is NOT on google.

Log in
to see state-specific standards (only available in the US).
CCSS6.RP.A.3d
Use ratio reasoning to convert measurement units; manipulate and transform units appropriately when multiplying or dividing quantities.
CCSS6.RP.A.3c
Find a percent of a quantity as a rate per 100 (e.g., 30% of a quantity means 30/100 times the quantity); solve problems involving finding the whole, given a part and the percent.
CCSS6.RP.A.3b
Solve unit rate problems including those involving unit pricing and constant speed. For example, if it took 7 hours to mow 4 lawns, then at that rate, how many lawns could be mowed in 35 hours? At what rate were lawns being mowed?
CCSS6.RP.A.3a
Make tables of equivalent ratios relating quantities with whole-number measurements, find missing values in the tables, and plot the pairs of values on the coordinate plane. Use tables to compare ratios.
CCSS6.RP.A.3
Use ratio and rate reasoning to solve real-world and mathematical problems, e.g., by reasoning about tables of equivalent ratios, tape diagrams, double number line diagrams, or equations.