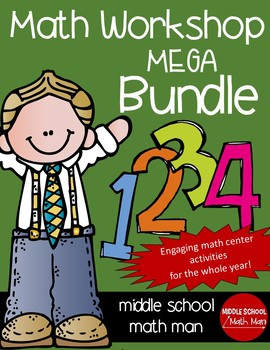 This middle school math bundle has over 120 resources for 6th grade math, including math task cards, exit slips, board games, scavenger hunts, and math sorts. Most games are updated with digital Google slides math games to use during math distance learning.

Activities can be used during math workshop centers or as supplementary activities in a whole group setting. Products are designed for 6th grade math, but can be used from 5th-7th grade math. Individually, the products in this bundle amount to about $365.

Many of the activities in this bundle focus on increasing students understanding of number systems, rates and ratios, expressions and equations, geometry, statistics, and probability concepts. To read a blog post with more detail about what is included, click the following link.

--- 5 standards and an end-of-year variety set

13. "What are the Chances?" Probability Activity

17. Challenge of the Week Problems

28. Fractions and Decimals Board Game Bundle *All include digital Google slides

29. Expressions, Equations, and Inequalities Board Game Bundle *All include digital Google slides

30. Area and Volume Board Game Bundle *All include digital Google slides

31. Probability and Statistics Board Game Bundle *All include digital Google slides

--- Probability Panic! A Math Board Game

--- Mean, Median, and Mode Mania! A Math Board Game