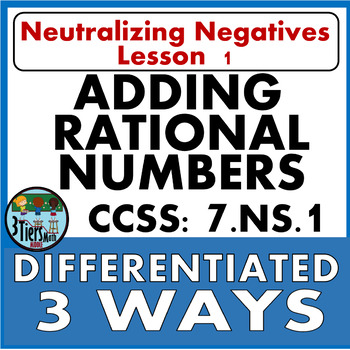 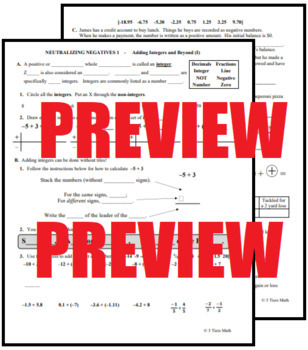 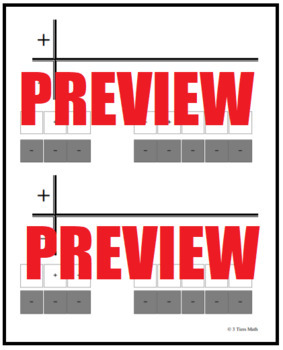 They begin with a guided inquiry about integers, sorting positive and negative tiles (included) to physically see that negative and positive integers work against each other, but two negative integers combine to be even more negative.

Next, they learn the 3 Tiers original "Stack, Add or Subtract, Leader of the Pack" model. Ignoring the signs, they Stack the larger number on top of the smaller in a traditional addition template. Then, they Add or Subtract depending on if the signs are the same or different. Finally, they give the answer a sign based on the Leader of the Pack. You'll have students successfully working with negative fractions and decimals faster than ever before!

After practicing a mix of raw problems, the model is applied to money with credits and debits, and to football yardage gained and lost.

About the 3 TIERS MATH model:

We have analyzed and targeted the known struggles for this topic by scaffolding the lesson in 3 differentiated versions: Independent, Hints, and Guided. Word banks, answer keys, sentence starters, templates, hints, problem chunking and other strategies are used to provide a means for less confident students access the same curriculum and rigor, allowing all students to engage in one common learning experience.

This lesson is designed for students to work through in pairs or groups to discover the big ideas through guided inquiry. While some direct instruction is required, the structure empower students to be independent learners, where your role transitions to more of a mentor than teacher. It is the first lesson in the Neutralizing Negatives Unit for a 7th grade Common Core math class. There is a different lesson that is geared toward a 7th grade Accelerated Math class (not included).

Log in to see state-specific standards (only available in the US).
CCSS7.NS.A.1b
Understand 𝘱 + 𝘲 as the number located a distance |𝘲| from 𝘱, in the positive or negative direction depending on whether 𝘲 is positive or negative. Show that a number and its opposite have a sum of 0 (are additive inverses). Interpret sums of rational numbers by describing real-world contexts.
CCSS7.NS.A.1a
Describe situations in which opposite quantities combine to make 0. For example, a hydrogen atom has 0 charge because its two constituents are oppositely charged.
CCSS7.NS.A.1
Apply and extend previous understandings of addition and subtraction to add and subtract rational numbers; represent addition and subtraction on a horizontal or vertical number line diagram.
Total Pages
10 pages
Answer Key
Included
Teaching Duration
50 minutes
Report this Resource to TpT
Reported resources will be reviewed by our team. Report this resource to let us know if this resource violates TpT’s content guidelines.