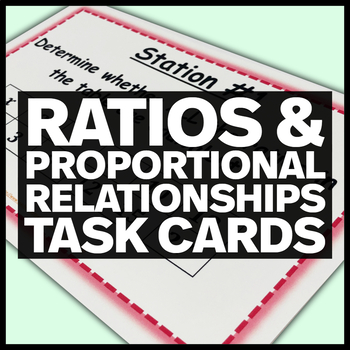 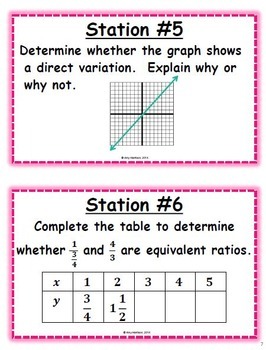 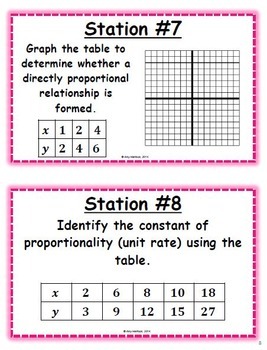 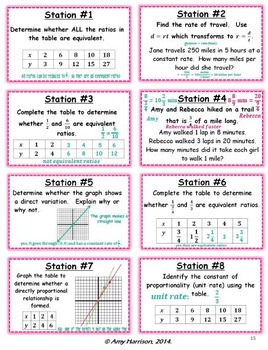 Stations are the perfect activity for your restless and impatient students who like to get up and move around! The collaborative element makes them fun and engaging - a great change of pace from the typical warm up or test review!

Getting their bodies moving will often get their brains moving. Stations are an amazing warm up activity! With a variety of different questions, it’s definitely one of the most fun ways to review for a test.

Check out the comments and reviews - this resource is easy to use and students LOVE it!

Analyze proportional relationships and use them to solve real-world and mathematical problems.

HOW CAN YOU USE THIS ACTIVITY?

Cut out and laminate stations so you can use them every class period and every year!

I typically have students work in partners, but BOTH of them have to fill out the student information sheet, showing work. Students could also work individually. Working with more than one person gets too crowded, and some students skate by without participating at all.

There should never be more than two people at a station (unless you have more than 40 students…).

Encourage (or require) students to write down EVERY problem so that if they run out of time on one station, they can finish earlier problems at another station.

Give students a specific time to complete each task. (1-2 min) Use a timer that goes off to help students know when to switch stations. This way, when the timer goes off, students will just get up and move without direction. Determine the amount of time based on the skill set of each group. I give some classes more time than others if needed. If I start with 2 minutes and all of the students are finishing quickly, I will decrease the time as we go. Usually 2 minutes is too much!

I use this resource every year in the middle school math classroom. It can take up to a whole class period depending how much time is given to the students per station.

Before you buy, note: This product is part of my Complete Bundle of Math Stations and Task Cards

Total Pages
20 pages
Answer Key
Included
Teaching Duration
55 minutes
Report this Resource to TpT
Reported resources will be reviewed by our team. Report this resource to let us know if this resource violates TpT’s content guidelines.