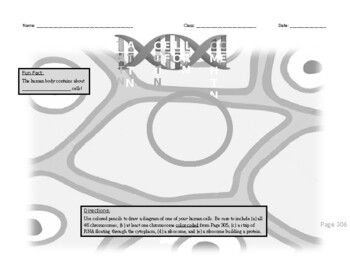 Today we started class with a simple goal: draw a picture of one of your human cells. Human beings are made up of trillions of cells. They’re microscopic. So how hard could it be? Actually… pretty hard.

Students had to include a strip of their DNA, color-coded to match yesterday’s genetic code. Then they had to add in the other 45 chromosomes as well. They also had to include a ribosome, some RNA, and a ribosome building a protein. And that’s not even every organelle. And in reality, each chromosome is millions of base-pairs long. So much for realism.

Log in
to see state-specific standards (only available in the US).
NGSSMS-LS3-1
Develop and use a model to describe why structural changes to genes (mutations) located on chromosomes may affect proteins and may result in harmful, beneficial, or neutral effects to the structure and function of the organism. Emphasis is on conceptual understanding that changes in genetic material may result in making different proteins. Assessment does not include specific changes at the molecular level, mechanisms for protein synthesis, or specific types of mutations.
NGSSMS-LS3-2
Develop and use a model to describe why asexual reproduction results in offspring with identical genetic information and sexual reproduction results in offspring with genetic variation. Emphasis is on using models such as Punnett squares, diagrams, and simulations to describe the cause and effect relationship of gene transmission from parent(s) to offspring and resulting genetic variation.