A Journey to Ancient Egypt 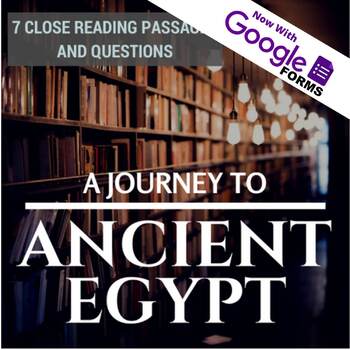 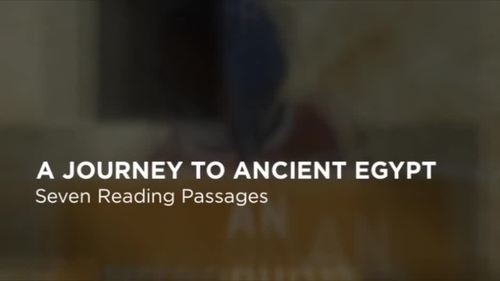 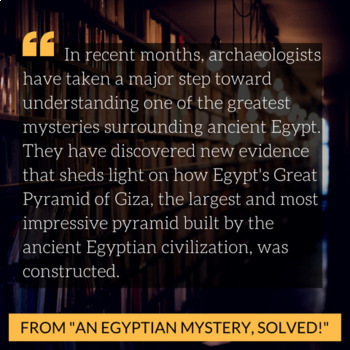 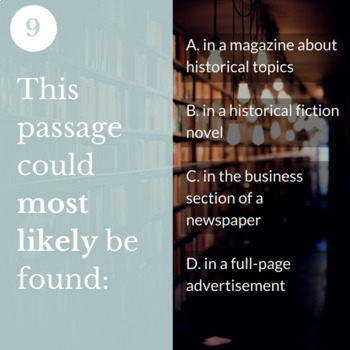 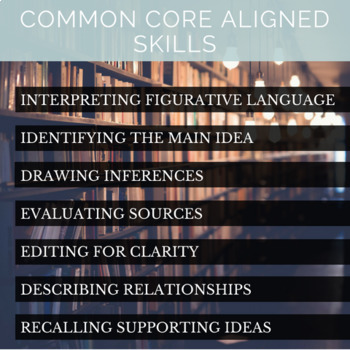 Passage 1: An Introduction to Ancient Egypt

In this informational text, students are introduced to the beginnings of ancient Egyptian civilization. They will learn about:

• The transition from hunter-gatherers to farmers

• The Red Land and the White Land

• King Menes and the capital city of Memphis

In this magazine article-styled text, students explore how new evidence has helped archaeologists to understand how the huge blocks of the Great Pyramid of Giza were transported. Students will learn:

• What is the Great Pyramid of Giza?

• How did archaeologists gather evidence to formulate a new theory about the construction of the pyramid?

In this historical fiction narrative, students meet Tausret, the owner of an Egyptian pomegranate orchard. Students will explore:

• The role of women in ancient Egypt

Passage 4: Would You Be Pharaoh?

In this persuasive text, students are asked to weigh the pros and cons of being pharaoh. Students will learn:

• Who the pharaoh was

• What the pharaoh’s roles and responsibilities were

In this informational passage, students will explore the social classes of ancient Egypt. They will learn:

• Who belonged to each social class in ancient Egypt

• The relationship between class and religious beliefs in ancient Egypt

In this informational passage, students will learn about hieroglyphics. They will study:

• How hieroglyphics differ from modern writing

• How hieroglyphics were translated

• How new discoveries can cause archaeologists to revisit old theories

Passage 7: Iput and the Scorpion

In this historical fiction narrative, students will explore the relationship between medicine and religion in ancient Egypt through the story of Iput. Students will learn:

• The role women played in ancient Egypt as healers and priestesses

• The significance of the Egyptian goddess Serket

Log in
to see state-specific standards (only available in the US).
CCSSRL.4.1
Refer to details and examples in a text when explaining what the text says explicitly and when drawing inferences from the text.
CCSSRL.4.2
Determine a theme of a story, drama, or poem from details in the text; summarize the text.
CCSSRL.4.3
Describe in depth a character, setting, or event in a story or drama, drawing on specific details in the text (e.g., a character’s thoughts, words, or actions).
CCSSRL.4.4
Determine the meaning of words and phrases as they are used in a text, including those that allude to significant characters found in mythology (e.g., Herculean).
CCSSRL.4.6
Compare and contrast the point of view from which different stories are narrated, including the difference between first- and third-person narrations.