A Problem in Einstein's Relativity 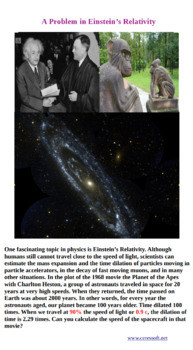 Physics problem in Einstein's Relativity. It is a good practice problem for Honors and AP Physics 2 students. The problem is the following:

One fascinating topic in physics is Einstein’s Relativity. Although humans still cannot travel close to the speed of light, scientists can estimate the mass expansion and the time dilation of particles moving in particle accelerators, in the decay of fast moving muons, and in many other situations. In the plot of the 1968 movie the Planet of the Apes with Charlton Heston, a group of astronauts traveled in space for 20 years at very high speeds. When they returned, the time passed on Earth was about 2000 years. In other words, for every year the astronauts aged, our planet became 100 years older. Time dilated 100 times. When we travel at 90% the speed of light or 0.9 c, the dilation of time is 2.29 times. Can you calculate the speed of the spacecraft in that movie?