A Problem in Magnetism 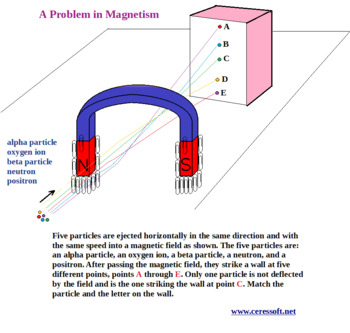 This physics problem is about the magnitude and direction of the magnetic force experienced by different particles. It is a good practice problem for Honros and AP Physics 2 students. The problem is the following: Five particles are ejected horizontally in the same direction and with the same speed into a magnetic field as shown. The five particles are: an alpha particle, an oxygen ion, a beta particle, a neutron, and a positron. After passing the magnetic field, they strike a wall at five different points, points A through E. Only one particle is not deflected by the field and is the one striking the wall at point C. Match the particle and the letter on the wall.