A Wrinkle in Time Cootie Catcher 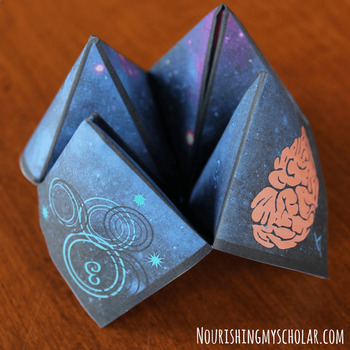 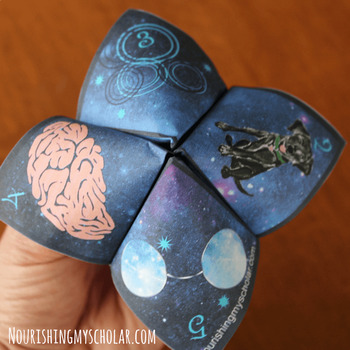 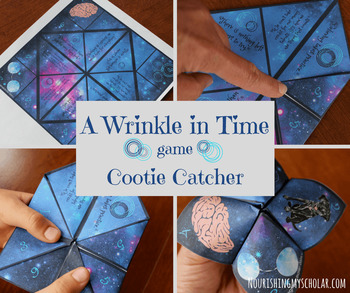 This is a fun little printable for kids that loved A Wrinkle in Time book. It's simple, yet the ending choices are all memorable book quotes to remind us all...

"Believing takes Practice."
"We can't take credit for our many talents. It's how we use them that counts."
"There is nothing left except to try."
"Nothing is hopeless; we must hope for everything."
"People are more than the way they look."
"There will no longer be so many pleasant things to look at if responsible people do not do something about the unpleasant ones."
"Life with its rules, its obligations, and its freedoms, is like a sonnet: You're given the form, but you have to write the sonnet yourself."
"Love. That was what she had that IT did not."

My son helped me with choosing the images for this cootie catcher game. He thought the Brain... known as IT, Fortinbras... the family's big black dog, and Mrs. Who's Magical Glasses were all great choices. I added in the Concentric Circles from the 50th-anniversary book cover for nostalgic reasons. We were both pleased with the result.

How to make a Wrinkle in Time Cootie Catcher

Cut off the white edges of the square pattern you printed.

With your pattern facing down, fold all four of the corners into the center. Be sure to watch your lines and try to make it as even as possible.

Turn your pattern over. Fold the corners into the center again to create a smaller square. Be sure to crease your edges.

Then, place your fingers into the bottom of the paper and pop it up to make four cone shapes. Your Wrinkle in Time Cootie Catcher is now ready!

How to Play a Wrinkle in Time Cootie Catcher

Hold your Wrinkle in Time Cootie Catcher with two hands. Place your thumbs and pointer fingers inside the cone shapes. The person playing chooses an image on the top. Either the Brain... known as IT, Fortinbras the dog, Mrs. Who's Magical Glasses, or the Concentric Circles.

On the third number selection, instead of counting out the numbers again, the player will open the flap and read the quote from the book inside and hopefully be a bit inspired.

You can see more about how to make and then how to play the Wrinkle in Time Cootie Catcher at this post.... https://nourishingmyscholar.com/a-wrinkle-in-time-cootie-catcher/
Total Pages
2 pages
Answer Key
N/A
Teaching Duration
N/A
Report this Resource to TpT
Reported resources will be reviewed by our team. Report this resource to let us know if this resource violates TpT’s content guidelines.