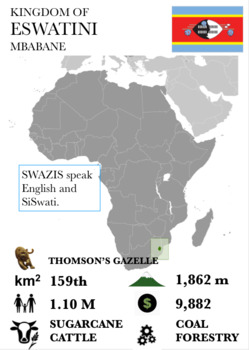 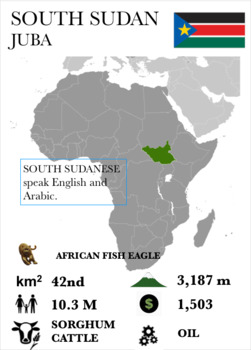 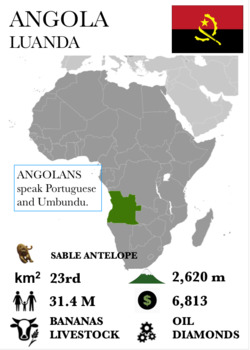 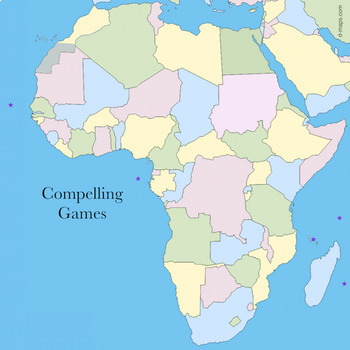 GAME ENDS: When all the cards have been played

States of the World is a collection of board and card games drawing on basic geographical knowledge of several types including country names and locations, capital cities, and relative sizes of land masses, populations and economies. There is some element of luck (cards are drawn) but it is essentially a strategy game as players make decisions each round in their attempt to fulfill the winning criteria. The games can be tailored to suit any level of geographical knowledge and can also be enjoyed by groups of mixed geographic and English abilities.

For players with low geographic knowledge, it is suggested that the games be learned in the following order.

Players start at Western Sahara (gray space on the map), draw a card, roll the dice, and move their piece that many spaces naming all the countries passed through. When the destination is reached, a new card is drawn. If a mistake is made the player returns to the last correctly named country. The other players can look at a map key to ensure countries are named correctly. The game ends after a fixed number of turns (for example 10).

When a player reaches their destination, the remainder of their movement is forfeited and they must wait until their next turn to start the journey home. A player may not pass through an occupied country. A player may not visit the same country twice on the same turn. A player can move fewer spaces than the number on the die.

Both players draw a card and declare their country’s name. Player 1 asks a question from the question cards. If player 2 answers correctly, or has the better rank or larger number, player 2 wins and keeps both cards. Play alternates until a fixed number of rounds is completed. Questions can be chosen by the players based on their existing geographical knowledge, or in a fixed order, or randomly. A subset of the questions to be used may be decided before play begins.

Each round consists of 2 players drawing 1 card each and declaring their countries. Player 1 asks a question as in Game 2 WAR. The winner can either keep the card they are holding or change cards with the losing player. Then both players place a piece on their acquired country on the map board. Play now continues with player 2 and player 3. The game ends when all the country cards have been used. Points are scored for linked countries: 1 point for each contiguous country, minimum 3. Any 3 island nations (Madagascar, Mauritius, Seychelles, Comoros, Sao Tome and Principe, Cape Verde) scores 5 points.

Africa is available as a free download so you can get a sense of the quality of the product.

Based on both players’ cards (hidden from view). Players must say the numbers correctly.

How big is it? (land area, world rank)

What is the population? (2019 or latest available data)

How high is the highest point? (meters above sea level)

What is the GDP per person? (US dollars at purchasing power parity, 2019 or latest available data)

From the questioner’s card (hidden from view).

What’s the capital of questioner’s country?

Point to questioner’s country on the map.

What language is spoken in questioner’s country? (2 most common official languages)

What is the national animal? (sometimes unofficial)

From the questioner’s card (hidden from view).

What is one agricultural or industrial product? (exact answer is not necessary)

Name any two neighboring countries. (none if an island)

Point to the national flag. (Flag cards should be cut out and randomized.)

What are citizens called in questioner’s country? (nationalities, not ethnic groups)

Before play begins, players decide which level or levels to use.

1 Questions must be asked in order.

2 Once a question is asked, it can’t be used again until all other questions have been asked. (A marker can be placed on the question card)

4 Weaker students can only be asked level 1 questions.

5 The same question can’t be asked twice in a row.

Islands can be reached from the nearest mainland country only if a 3 or higher is rolled; in other words it takes 3 movement points to cross the ocean.

Print out cards on heavy card stock (backs are included). Cut and laminate. Print out the high resolution game board. The png image (5400 X 5400 px, 300 dpi) is suitable for an 18 inch square board. Or just print out the 6 page PDF file and tape together for a game board. Round up small game pieces (about 25 per player).