ALASKA in Award-winning Fiction and NonFiction with Great Teachers 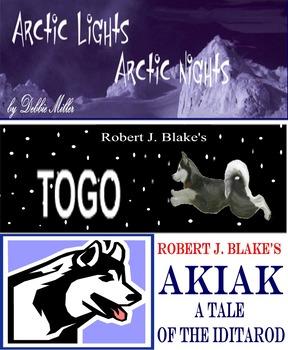 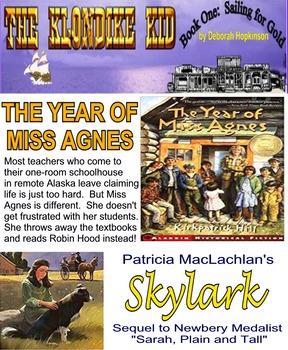 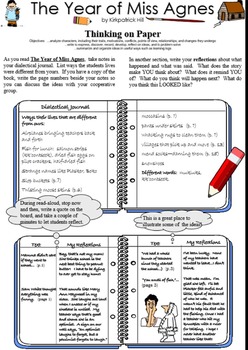 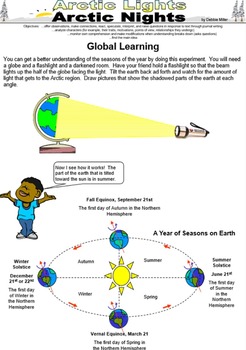 42 Pages of Activities for Five Amazing Award-Winning Books set in Alaska! Fiction and NonFiction in Kids Wings Literature Guides with a Bonus Unit for Skylark by Patricia MacLachlan!

ARCTIC LIGHTS, ARCTIC NIGHTS by Debbie Miller, NONFICTION
Month by month, the Arctic changes. From the northern lights to extreme temperature changes to 21 hours of light and dark, the Arctic offers uniqueness! Beautiful descriptions and illustrations accompany each month's documentation of hours of daylight, sunrise, sunset, average highs, and average lows. Here you will meet the beauty of nature and of the living creatures who are specially adapted to live in this extreme environment.
Activities for the nonfiction science related book come to you in both PDF and PowerPoint formats and include:

One of the most amazing races of the 20th Century is the Iditarod, a dog sled race that began in 1967 across 1,161 frozen miles of Alaska, demanding its dogs run almost 100 miles a day, pulling a sled with their musher aboard.  Although AKIAK has raced the Iditarod before, this ten-year-old huskie, a determined lead dog, knows that this is her last opportunity to win.  Fighting injury, blizzard, and the rules of the race, her courage and determination lead her to attempt the impossible.
Kids Wings Activities for AKIAK come to you in PDF format and include:

The Heart of a Leader
Lessons from a Dog
Attacking the Words
Read Aloud for an Audience
Are We There Yet?
Are We There Yet? Using the Graph to Solve Math Problems
And the Winner Is Crossword Puzzle
Answer Page

TOGO by Robert J. Blake, NONFICTION
As a puppy, TOGO seemed to be an unlikely sled dog because he was small and independent. By the time he was eight years old, however, he became one of the greatest sled dogs ever, having won awards for speed and strength!

A diphtheria epidemic in 1925 threatened the entire population of Nome, Alaska. The only hope of saving the people of Nome was to get the serum to them from Anchorage in time. But HOW? The answer was to use a relay of dog sleds. It was TOGO who was called on to lead one team through a deadly blizzard and across frozen bays, without rest in 40-below zero temperatures. Was TOGO able to complete his mission and survive?
Activities for TOGO come to you in both PowerPoint and PDF formats and include:

The year is 1897. The place, Seattle. Young Davey is alone. He has saved his money so that he can go find his only living relative, Uncle Walt who has joined the Alaskan Gold Rush. When his money is stolen, Davey decides on a dangerous plan. Will he make it to Alaska or will the nasty Mrs. Tinker who owns his boarding house collar him before he can escape?

Sailing for Gold is the first in a trilogy of an exciting adventure told by Davey himself.

THE YEAR OF MISS AGNES by Kirkpatrick Hill

A new teacher comes to a remote Alaskan village that faces a dreaded giant:  Illiteracy.   Will she be able to offer hope through books, games, and projects?  How is compassion the stone that ultimately brings this giant down?
The Year of Miss Agnes comes to you in both PowerPoint and PDF formats and include:

SKYLARK by Patricia MacLachlan, HISTORICAL FICTION
The sweet sequel to Newbery Award-winning Sarah Plain and Tall
Activities for SKYLARK come to you in both PowerPoint and PDF formats and include: