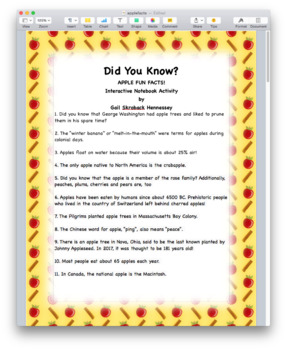 Doing a Fall unit on apples? Looking for an activity during a study of pioneers? Doing a unit on folk hero? Doing a biography on Johnny Appleseed? This interactive notebook on Apples has several activities and 17 interesting fun facts about apples.Note: 9 of the facts are included in my biographical play on Johnny Appleseed.

PLEASE CONSIDER FOLLOWING ME by click the green star by my photograph in the upper right hand corner.