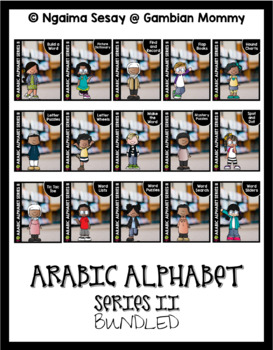 All About Letter Forms

The ARABIC ALPHABET SERIES II focuses on teaching, identifying and connecting Arabic letter forms based on where they appear in a word!

This is the next stage after introducing the Arabic alphabet (isolated letters/sounds) to kids.

The ARABIC ALPHABET SERIES II Makes use of three-letter words to make understanding the concept of beginning, middle and ending letter forms easy, PLUS there are 12 words for each letter!

Here's what in this mega bundle:

Ah, this is great but I just started teaching the ARABIC ALPHABET

Check out the ARABIC ALPHABET SERIES I loaded with tons of fun and engaging activities that cover skills from beginning sounds, letter formation to letter recognition and handwriting!

Please email me at gambianmommy@gmail.com

I am a non-native Arabic speaker whose aim is to teach my kids to learn to read the Arabic language in order to be able to read the Qur'an. The resources that I make do not necessarily use modern everyday vocabulary used in the Arabic language, as much as some words used are common day-to-day vocabulary, some of the words are also tougher older words that are not used nowadays and some are Qur'anic (root) words. In our Arabic journey I do not discount any Arabic word, I am not too concerned about whether it's used frequently or not, so long as it is an Arabic word and most importantly, so long as it used in the Qur'an. Please keep this in mind before making any purchase especially if you're looking for Arabic resources with easy common words used in Modern Arabic.