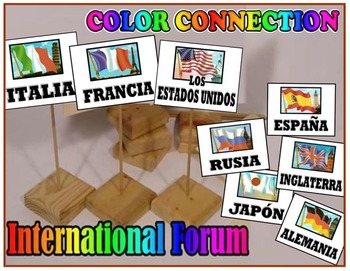 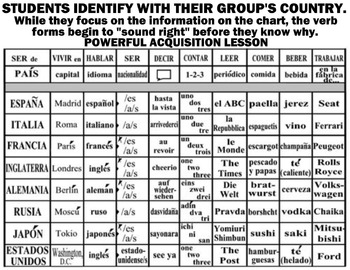 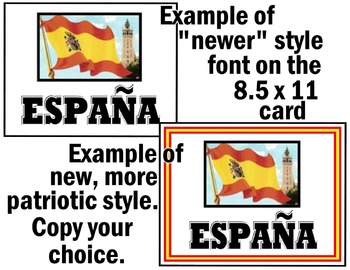 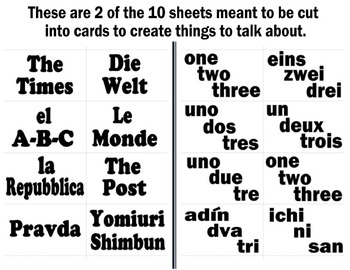 (5 MB|30+)
Product Description
The INTERNATIONAL FORUM KIT was first published in 1988, based on a lesson that I developed a few years before that. On an impulse one day in class, I grabbed some 3x5 cards and wrote the names of some countries. I gave one to the first person in each row; everyone in that row was to pretend to be from that country.
These were in my prehistoric, caveman (politically correct--cave-person) days of "Building Artificial Reality" lessons. Wow! Have we come a LONG way since then!
My so-called “plan” was to give context for practicing the verb HABLAR, by having each row say one line in the language of that country. Then we would practice, "Somos de Italia. Hablamos italiano. Ellos son de Inglaterra. Hablan inglés." I had each group say one line of the language of their country, so they really would be “speaking” the language. Then something was said about food, so we added COMER to the lesson and put a list of typical foods on the board. Someone mentioned the capital, so we added VIVIR and listed the capitals on the board. Then it just blossomed into the full-grown lesson. Spontaneous teaching? No way! Yes, way. And it worked. Complete with a chart that indicates several activities that one does in these different countries, and worksheets to practice many forms of the verbs in context. Many teachers have added more activities.
I chose countries whose names, nationalities and languages were all similar. Example: Country: Francia Nationality: francés(a/es/as) Language: francés.
I wanted each group to speak a different language, so I could not use all Spanish-speaking countries.
Many of the same basic ideas weave their ways through all of my materials in one form or another. I am quoting here from our original workshop handout, written by Carol Ross Stacy, in order to explain the basic rationale behind the INTERNATIONAL FORUM and all Color Connection materials and lessons.
"The common thread which unites most modern foreign language methodologies and techniques is that they all try to discover, distill and imitate the patterns of first-language acquisition and apply them in second-language acquisition. While most language educators agree, in theory, that this is the ideal way, we understand that the total REALITY of early childhood linguistic experiences cannot be reproduced within the limitations of the classroom setting. So what are we to do? BUILD ARTIFICIAL REALITIES by creating an environment via materials and activities which efficiently reproduce the ESSENCE of first-language acquisition. Some aspects of first-language acquisition that can be transferred to second-language acquisition, are:
•language is used to talk about a concrete reality, the here-and-now
(unlike TPRS and the creative stories that are about OTHER
people in OTHER places and OTHER times)
•comprehension precedes oral production
•comprehension is indicated by actions or “safe” utterances
•language production is the logical outcome of the situation
Many communication-based activities are used to practice or apply previously ‘learned’ lexical and grammatical concepts. In B-A-R activities, communication is not merely a follow-up activity; it is the VEHICLE by which the initial learning takes place."
Before going on with the initial International Forum lesson, you should be aware of one more important idea presented in the B-A-R workshop. Again Carol Stacy writes,
"Contrary to popular beliefs in education, the students need NOT know what our true lexical/grammatical objectives are. As in first language acquisition, the student's focus should be on the content of the lesson. The teacher, however, has a Dual Agenda:
(1) content, which is the students' focus and
(2) the underlying grammatical or lexical goal which is supported by the content.
A student can have only one focus at a time. While he is focusing on the content, the structure slips in the unguarded back door of the brain." Our initial goal with this lesson is to teach (not just practice) the pronouns, the forms of SER, that verbs have “forms” to match the subjects. The students think we are learning the names of the countries, what the people say and do in those countries, what their flag is like and numerous other bits of information.
AS IF THIS WERE NOT BORING ENOUGH, A VERY LONG, DETAILED EXPLANATION WILL COME WITH THE DOWNLOAD.
HORIZONTAL versus VERTICAL VERBS
Rather than teaching all forms of ONE verb (vertical verbs) try teaching all the SAME form of several verbs (horizontal).
For example: I demonstrate a lesson that introduces TENER IR ESTAR along with recycling and practicing SER.
IMPOSSIBLE! Heresy! Blasphemy! You can't do that!
Oh, but I can! And I did! And more importantly, YOU CAN TOO!
THIS IS ALSO INCLUDED IN THE LONG EXPLANATION.
A student once told me, "You are so sneaky. By the time we have to learn something, we already know it." Smart kid, good observation.