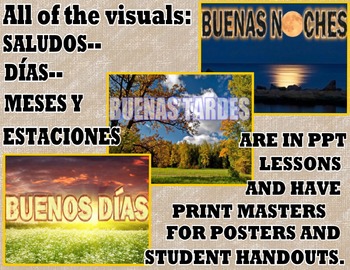 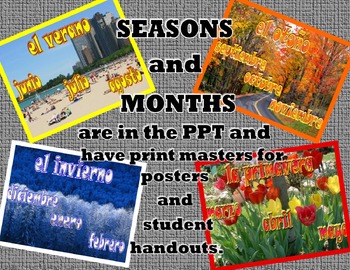 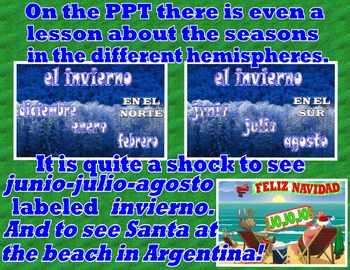 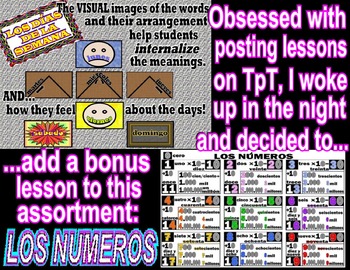 BONUS: WHILE CONSIDERING ALL OF THE LESSONS IN MY FILES, I DECIDED TO INCLUDE LOS NÚMEROS IN THIS LESSON.

IF YOU PURCHASED THE ORIGINAL LESSON BEFORE 12-19-15, PLEASE NOTIFY ME, AND I WILL SUPPLY YOU WITH THE ADDITIONAL MATERIALS. kaatz@airmail.net

This was one of the first lessons that I posted on TpT.
I did not know much about what services were available.
I wrote very short explanations, thinking that space was limited.
I didn’t understand how to include ppts previews.
I didn’t really understand about posting signs that appeared automatically even before the item was viewed. (DUH!)
I didn’t know how to provide hard-copy versions of materials.
(not needed for this lesson)
Yes, let’s face it, I was almost totally ignorant concerning the great things that are provided.

Over my 30 year career, I developed lots of hand-made visuals that are now actually funny because they are so primitive—but they represent teaching concepts that are as valid today as they were so long ago. The difference is that back then, they were so hard to make. We had to color them by hand. Well, at least we weren’t still having to draw them on the walls of the cave—by the light of the fire.

This lesson focuses on four areas in which visuals can “say it all.” Rather that having students memorize these items in a set order, you give them a visual image to tie their thoughts and feelings to the oral and written word. You use them in context.

THE PPT IS NOT MEANT TO BE SHOWN AS A "PROGRAM." USE ONLY THOSE SLIDES FOR WHICHEVER GROUP YOU ARE TEACHING.

I really enjoyed developing the context of explaining the seasons in the northern and southern hemispheres. I did this for a 4th and 5th grade class that I taught two years ago at a private school. I was amazed with how well they reacted to the lesson. I particularly loved the moment when I started showing the months and seasons in the southern hemisphere. They became so “disoriented” when they saw the slide with the words junio, julio, agosto in the colors of el invierno. It was such a shock that it REALLY hit home.

I included “student size copies” for younger or beginning students. They could keep them in their folders. After having already seen and interacted with you, the teacher, with the colored versions, after having seen them posted in class, the color is not as important, so I made masters both in color and in black and white. For the black and white ones, I would suggest having them color only the important words (or numbers) to highlight them--in the appropriate colors, of course.

Earlier I mentioned the importance of NOT learning these in order. That theory applies throughout the process of language acquisition—especially if the person already knows the order and must simply supply a new name. This applies to NUMBERS, ALPHABET—anything we tend to think of as being logical to teach in order and to test with rote recitation.

ROTE MEMORIZATION AND RECITATION causes LLBDS:
Language Learner Brain Damage Syndrome, a condition which I suffered for many years. Oh my, that is the same condition that is caused by VERB CONJUGATION, which is the primary killer of student enthusiasm for acquiring the language. I developed a system call the Spanish Verb Wall. It is now available in French, Latin, Italian. BUT it is not posted on TpT yet. I’m working on getting it ready for this type of system. Using physical, visual things such as color, fonts, graphics, and locations, it is a map of the pronoun-verb system of the whole language—somewhat like how the Periodic Table of Elements is a map for chemistry students.

I said “of the whole language” and that is true. BUT, we do NOT inflict all of that knowledge on students beyond their level, UNLESS something comes up in class that is important to explain. It is Friday night. You can show them what “Ojalá que ganemos” means. The football game, that is.

But that is another topic.
I am going to have in the fuller instructions which are downloaded, a drawing to show you a lesson that I call “The Birthday Lesson.” Just understand for now that this lesson allows you to present months and seasons with communicative activities, much more MEANINGFUL than memorization.
Before I go, I am going to beg your sympathy.
AFTER I LOADED THIS INTRODUCTION,
I FOUND NUMEROUS TYPOS EVEN THOUGH I HAD PROOFED IT MULTIPLE TIMES. WHEN YOU OPEN THE DOWNLOADED "KIT," THE SAME ERRORS WILL STILL BE THERE BECAUSE I WOULD HAVE TO CORRECT IT AND ZIP IT. I CAN'T DO THAT BECAUSE I DON'T KNOW HOW, AND I WOULD HAVE TO WAIT TO GET HELP. BY THE TIME I GOT TO THE 20TH CENTURY, THE 21ST HAD ALREADY ARRIVED.
Total Pages
ppt slides 500 intro masters 66
Answer Key
N/A
Teaching Duration
N/A
Report this Resource to TpT
Reported resources will be reviewed by our team. Report this resource to let us know if this resource violates TpT’s content guidelines.