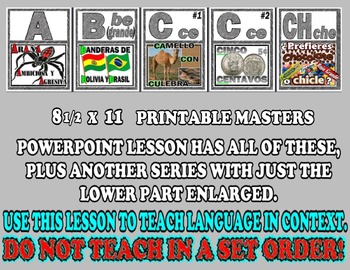 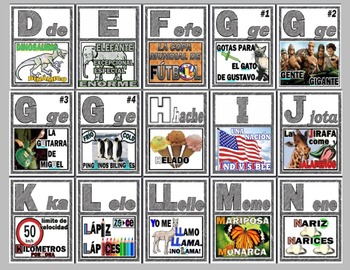 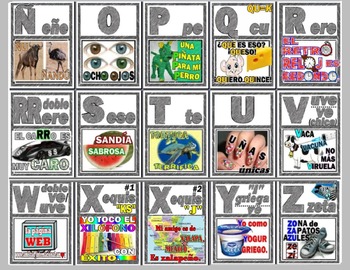 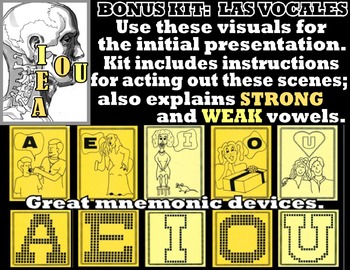 (60 MB|PPT 125 slides 40+ print masters)
Product Description
BONUS LESSON: LAS VOCALES
This is for very beginning classes--or a review for those who need to work on pronunciation. It explains that the Spanish vowels are much easier than English. The concept of strong and weak vowels is explained. It would be best to do this first so that the pronunciation starts off well. The lesson is totally explained in the extra files that are included.

TEACHING THE ALPHABET IN THE TARGET LANGUAGE
Most of the clever ideas concerning teaching the alphabet involve teaching the names of the letters in standard alphabetical order. Often this will be in the form of a song or chant. While teaching the alphabet in order seems logical, sometimes the most logical way is actually not the best way. Since our alphabets are basically the same for Spanish and English, our students do not need to learn the concept of alphabetical order. They need to learn the new name for the symbol and, of course, the sound it makes. (This same type of lesson also works for numbers.)
Teaching things in sequential order ties the learner to that order. Every teacher has seen the student who cannot say the name of this figure—5--until he counts uno, dos, tres, cuatro, cinco in Spanish on his fingers. In order to be able to NAME the letters randomly, because that's the way they will be needed in real life situations, the students need to learn the NAMES randomly.
I like to start with the HARDEST letters for English speakers to learn: G, H, J, Q, X, Z Begin the lesson by having these letters in place around the room. OUT OF ORDER! For example, the G is on the door, so I say ¿Dónde está la letra G? Everyone looks around. Pointing to the laminated sheet: ¿La letra G? (pointing to places) ¿En la puerta o en la ventana? Since they are pointing to the door, they are saying the word and learning or reviewing it at the same time. ¿Dónde está la letra H? En la pizarra. ¿J? en el reloj. It doesn't matter where you place the letters, but the more bizarre, the better. Continually “recycle” going back to the first letters, skipping around. Keep the pace very fast so that they do NOT have time to translate. If you notice that they don’t remember the name of the letter or the name of the location, give them choices, just like you would do your own small child learning his or her native language. ¿La letra que está en la puerta—es G o J?
After these 6 are presented and practiced, start with the easier letters, but now you can involve the students more. For example, tape the M on someone's hand. Now we have to say: La letra M está en la mano de Miguel. (Sneaking in the structure of possessive--when I say ¿La letra M está en el pie de Miguel o en la mano de Miguel? everyone answers automatically, en la mano de Miguel. No one says en Miguel's mano because they don't have time to translate, they just respond.) I do some very strange things like: La letra N está en la nariz de la maestra. Yes, I really do tape the N on my nose--or on my glasses—or my hair. All the while I am adding new letters, I keep "recycling" the ones previously mentioned, at first asking ¿Dónde está la letra ...? then alternating with ¿Qué letra está en el brazo derecho de la chica que lleva la blusa roja? ¿Qué letra está en el zapato izquierdo del chico que juega fútbol americano? Obviously, they don't understand everything you are saying, nor can they repeat it, but they are unconsciously absorbing a lot of passive vocabulary and structure to be called up later. You are planting seeds for the future.
I always selected a letter which I placed on a poster of Iguazú Falls in Argentina and told them that I would like to visit that place someday before I die. La letra T está en la foto de las Cataratas de Iguazú, un lugar que la maestra quiere visitar antes de morirse. When I first did that, it was funny because I was in my 30’s—in my 40’s it was still somewhat funny—then in my 50’s only a little funnyish. Now that I am in my 70’s, I’m afraid to visit Iguazú. I can just hear everyone after my visit---well, at least she finally got to see Iguazú before… Let’s change the subject here!
After all the letters are placed and talked about, the students remember not only the name of the letter, but where the letter was and who or what was associated with it. I saw a boy once at the mall years later, and he told me--La letra C está en mi cabeza--to help me remember his name and which class he was in.
This phenomenon is called “paired associative learning.” Connecting facts to be learned to something else—especially something physical or visual--to make the learning easier. This works because you are activating several parts of the brain. You are giving the brain some memory hooks to which it can tie the information concerning the name of the letter. You are asking for decision-making as they look around the room, find the letter, name the place or person, etc. Higher level thinking skills are involved in making a decision.
• ROTE RECITATION REQUIRES NO REAL THINKING.
• “LOGICAL” ORDER REQUIRES A LITTLE THINKING.
• RANDOM ORDER REQUIRES THINKING.
• THINKING PROMOTES RETENTION.
When the student is having to think before speaking, the learning goes deeper into the brain.
Pam Kaatz
P.S. I VISITED THE CLASSROOM OF A TEACHER WHO HAD BOUGHT EL ALFABETO. THE LETTERS WERE POSTED UP OVER A LONG BULLETIN BOARD IN ORDER.
“SO,” I ASKED, “HOW DID THE ALPHABET LESSON GO? DID THEY LEARN A LOT OF CLASSROOM VOCABULARY, BODY PARTS, CLOTHING, POSSESSIVE FORMATION, ETC.”
“NO, NOT YET,” SHE REPLIED. “WE HAVEN’T REALLY STUDIED IT YET, SO EVERY DAY I WALK ALONG UNDER IT, POINTING TO EACH LETTER, AND THEY TELL ME THE NAME OF THE LETTER.” WHAT CAN I SAY???