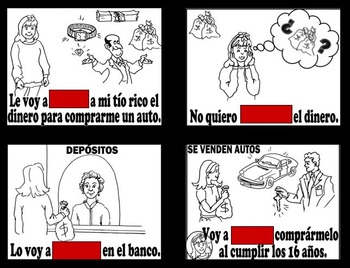 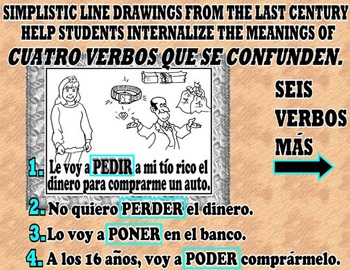 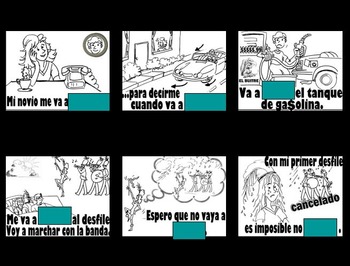 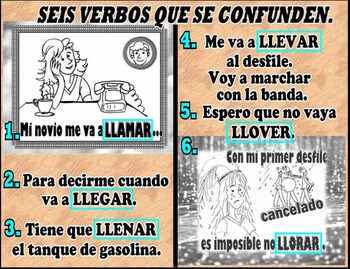 One year I assigned a project for which each student in my Spanish 3 class had to make something to explain some language detail/s that had been hard for him/her to understand--
OR just some clever way to teach certain vocabulary--OR how to make someone understand a particular point of grammar--OR something to motivate students to study another language.
I approved each basic idea, and they went from there. You might have seen my kits called “Concrete Adjectives” and “Comparative Adjectives” which came from similar thinking on the part of students. (I just included those two lessons in a larger kit about LOS ADJETIVOS.)

Sad to say, I do not even remember the name of the student who drew these neat, simple drawings that were originally turned in as—wait to hear this—original ink drawings, not copies and definitely not computer-art. Why not?
Because we didn’t have computers back when these were made!!

Each set has a “story” to provide context to help the students internalize the meanings.

Each verb is “translated” the first time through the story. If you prefer NOT to do that, simply delete those slides from the program. Then the story is repeated with the verb covered on the first showing of the slide, then revealed on the second. This would be something the students could practice on their own once the idea has been introduced.

I edited some of the drawings to be able to add a few features. I added the portrait of the novio in the first slide, the price of the gasoline and the name of the gas station in another. (Gas was almost $4 when I first updated this kit to use while subbing a couple of years ago.)

I included a “Student Hand-Out Version” just in case you want to make copies for the classes.

Don’t torture the students with this information. Try to make fun of the silly pictures, anything to make the lesson humorous. That helps with the memory process.

When I was doing my student teaching back in the Dark Ages, my mentor teacher warned me that I should not try to be humorous with the students. He explained that I would lose their respect.

Over the years, many ex-students have contacted me and told me how they never forgot a particular detail because of the HUMOR involved. Some people would call this “Paired Associative Learning”—tying the memory of the information to be learned with an experience.

I know this works because I remember things like learning the word conejo in Argentina when someone was telling a joke and that word was the key to the punch line. When I hear that word (and there are thousands of other similar memories) I re-live that humorous moment. (1967)
So far away; so long ago.

(All typos are the result of senility, not ignorance)