A~SPANISH~H~SER and ESTAR: VISUALIZING THE DIFFERENCE IN MEANING 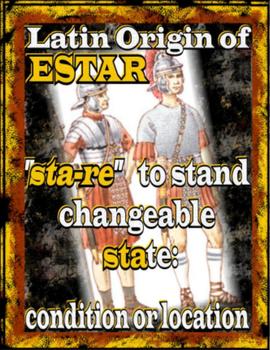 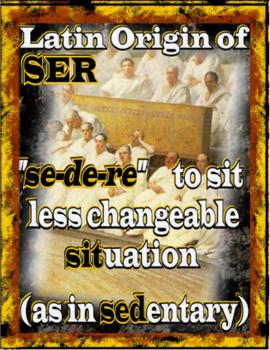 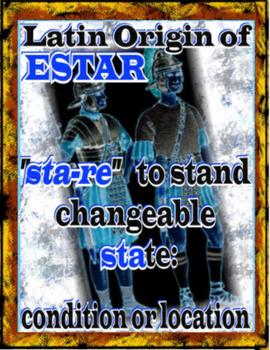 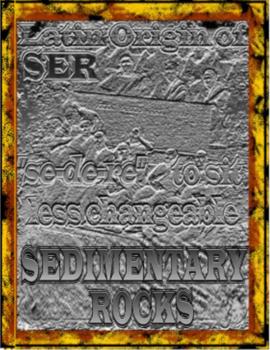 (21 MB)
Product Description
SER and ESTAR:
VISUAL LESSON TO INCREASE UNDERSTANDING OF THE DIFFERENCE BETWEEN THESE TWO VERBS BY EXAMINING THEIR LATIN ORIGINS IN OTHER WORDS: A SUPER-SILLY POWER POINT LESSON THAT CREATES A VISUAL IMAGE
OF HOW ONE VERB SPEAKS OF CHANGEABLE CONDITIONS
AND THE OTHER VERB DOESN’T. WOW!
That was probably the longest title ever written to introduce a very short power point lesson.
Spanish teachers have to deal with the concept that the Spanish language has two verbs to express our English verb TO BE. Textbooks tend to make this distinction quite difficult to learn by going into so MUCH detail.
They give our poor students—no, make that—they TORTURE our poor students with long lists of uses for each, when in reality it boils down to one simple concept. (Of course, all of you Great Grammarians know there are always little exceptions.)
ESTAR, based on the Latin verb STARE, pronounced STA-RE (I guess--since it was being said slightly before my time on this planet began) which simply means TO STAND. If you are standing, you are mobile. (I watch a lot of BBC programs, so I pronounce that “mo-bile” to rhyme with “file.”) If you are standing, you are in a changeable state. A state can be a condition (tired) or a location (Texas).
Right after the terrible events of 9-11, I realized that we still have a remnant of this meaning left in the English language. All of those signs and banners came out to express our condition: UNITED WE STAND! Then other uses of it hit my brain:
I stand corrected. What is their standing in the contest?
In of all of those cases, STAND really means a form of TO BE. UNITED WE (STILL) ARE! I am corrected. Where are they in the contest? What is your STATUS simply means something like: How are you?
So I always just told my students, “If you are expressing a condition or location, use ESTAR, not SER.” I did mention the minor exception of using SER for the location of events. El examen (event, not paper exam) es en el auditorio.
El examen (paper EXAM, not event) está en mi escritorio.
Thus we have now arrived at the MANY uses of SER of which the textbooks LOVE to give us LONG LISTS! OK, here we go: Use the verb SER to express TO BE
ANYTIME YOU ARE NOT DESCRIBING A CONDITION OR A LOCATION.
SER, was based on the Latin verb SEDERE (my guess is pronounced SE-DE-RE) which meant TO SIT. You can just feel the difference. If you sit, you are less mo-bile; you are less changeable. Aren’t some professional titles expressed by saying they have a SEAT in the organization? Don’t we say someone is a “sitting professor” at the university? Perhaps someone who was a babysitter, was simply someone TO BE with the baby. I honestly don’t know. (That is so hard for MOI to admit!)
When I was working with a Latin teacher to develop the Latin version of my Spanish Verb Wall, I had the most unusual feeling when I learned that STARE meant STAND and SEDERE meant SIT. I could almost feel my brain going back through the centuries as it connected those words to the two Spanish verbs for TO BE. I call it “recognizing my linguistic DNA,” something programmed in my brain to connect with those people who lived so long ago.
Sorry, I can get a bit weird about language and etymology. (If my husband is proffing this for me, he is thinking, “A BIT weird?” which is WHY he didn’t catch that I had misspelled proofing.)
Of course there are also little details. For example, a young man describes his girlfriend to his friends: Mi novia es muy bonita. Then he goes to pick her up for the prom: Mi amor,
¡qué bonita estás! In that one word he has expressed that at this time she is even more beautiful than she is every day.
We usually say ESTAR is for changeable conditions. In modern society saying: Juan está casado seems more logical. But saying: Mi bisabuelo está muerto still seems a bit odd to me. But it IS a condition.
As you show the powerpoint, the students will capture the images of the two Roman soldiers who are mo-bile and change every time the slide changes, while the Roman senators just SIT in the senate without moving until they change from just being sedentary to being sedimentary rock. (Those words also came from SEDERE.)
I developed this idea after retiring but I am teaching part-time at a small school just two days a week. We are about ready to hit this concept. I think it will probably come to pass that I will just say: ¿soldado o senador? NOT permanent or changeable condition--to make the brain make the choice using the visual image, the feeling the slides develop—not a LONG, PAINFUL LIST of rules!

Shortly after I posted this lesson, I received complaints from two teachers who informed me that one of the slides was upside down. This was merely one more visual to illustrate "condition."