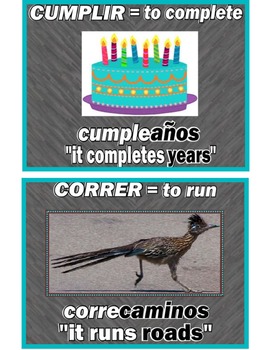 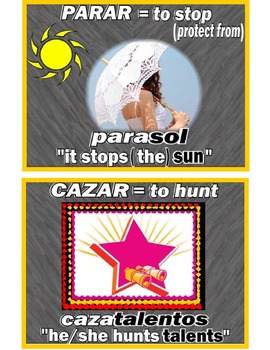 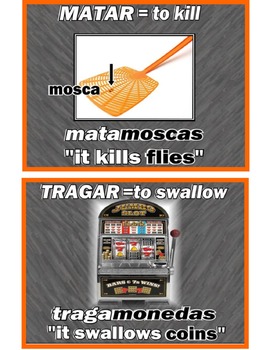 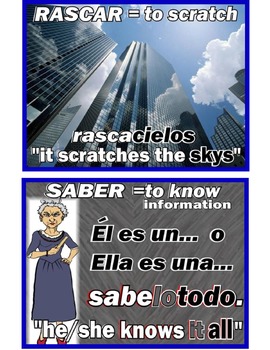 Many words are formed with the third person singular of a present tense verb followed by a noun. For example, we translate "the birthday" into Spanish as "el cumpleaños." This is actually the verb "cumplir" + the noun "años." The subject of the verb is “it”—in this case, "the day." It completes years of your life, so it is the "cumple-años," or the "year-completer." Using the vocabulary list given with the "fill in the blanks" worksheet, the students can "figure out" the meanings of the compound words, well, MAYBE. Some are a bit bizarre, but they also call attention to the fact that some of our names are also strange.

The hidden purpose of this lesson is increasing the vocabulary of the students by having them understand the two root words that were patched together to form the Palabras Compuestas. By learning, for example, "espantapájaros," the student has learned the verb “to scare.” Scarecrows in Spanish are more powerful than ours because they scare birds, all birds, not just crows! But our skyscrapers are more powerful because in Spanish they only scratch the skies. "rascacielos"

Some of the words are actually quite humorous. A slot machine swallows coins--"tragamonedas." Our tongues only get twisted, while theirs trip! "trabalenguas" A puzzle breaks people's heads. "rompecabezas"

I had students whose brains short-circuited on a simple quiz. They could not find the Spanish word for the English "parasol." While reading in the Spanish column, they saw the word as "it stops sun" -- "para-sol."
Enjoy the lesson. The long vocabulary lists are not meant to be copied for students. They are reference lists for the teacher. Pam Kaatz