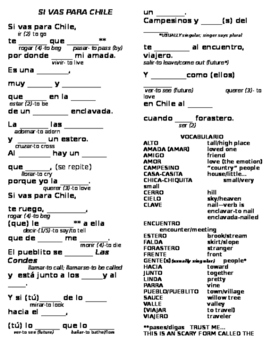 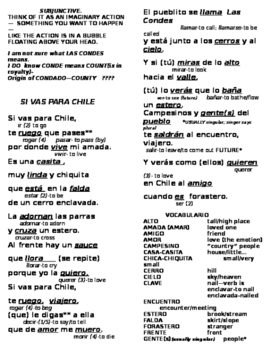 (67 KB|3 pages)
Product Description
SI VAS PARA CHILE
A couple of years ago, I taught SI VAS PARA CHILE, a folksong that I learned in Argentina in 1968. It had haunted me for years, then finally they invented the internet for me so I could hear it again. (Of course, that did not dawn on me for about 20 techo-challenged years.)
For the class listening activity, I found a great quartet--LOS HUASOS QUINCHEROS-- singing in the folklore style typical of Chile. The video aspect was not well-recorded, but the sound is spectacular. This is how the song was originally meant to be sung—as a folksong. Please make students aware that this is a cultural event, complete with an orchestra. People of Chile do not dress in this fashion except for FOLK events. Sometimes our students misunderstand and get stereotypical ideas about other cultures.
http://www.youtube.com/watch?v=SmvM51QkkCk
I found another great version of the song. The video was recorded in 2008 at the Festival de Viña, an international music festival which takes place every year in February, in the summer, near Valparaíso, Chile.(southern hemisphere) The singer is Marco Antonio Solís, a very renowned singer from the state of Michoacán, México. When the group of young women come on stage dancing, to most Texans it will look as if they are wearing dresses made of our flag. The flags are very similar, so much so that several years ago, the flag of Chile flew in front of the courthouse in **** (a major Texas city that I will not embarrass) for several months—until someone noticed that “they” had made the flag “wrong”—not WE had bought the WRONG flag.
The reaction of the audience when Marco Antonio Solís sang the first words was amazing—and the way they sang with him at the end was overwhelming. HOWEVER, he does make one minor error, reversing two phrases. The folk music group sings it “correctly.”
The line should be: Es una casita muy linda y chiquita
He sings: Es una casita chiquita y muy linda
http://www.youtube.com/watch?v=DlenMZHp6cs&feature=kp
I had heard of this singer, but had never seen him perform before, so I checked his concert schedule and discovered that he was coming to Dallas! The cheapest price in the “nose-bleed section” was ONLY $91, but I would prefer to sit closer like in the $500 section. Plus, I am told the parking alone is $60! So I think I will probably stay home instead and watch this video.
The lyrics and listening activities are included here. We listen to about 2-3 lines—stop the song—and ask what they heard. We repeat until they are able to hear the words and understand them. You cannot imagine what I felt hearing a class of American students singing this song. If you have any trouble understanding some of the lines,feel free to ask me.
Whenever I meet someone from Chile, I begin singing the song. They are amazed that an American knows it—then we sing the whole song together. What an “ice-breaker” when you meet a chileno or chilena.) ENJOY!!
Pam Kaatz AKA La Anciana Venerable kaatz@airmail.net 214-906-2106