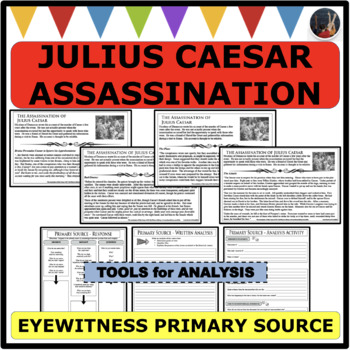 Allow your students to discover more about the ASSASSINATION OF JULIUS CAESAR using this eyewitness account activity. The assassination of Julius Caesar was a conspiracy of several Roman senators, notably led by Marcus Junius Brutus, Cassius Longinus, and Decimus Brutus, at the end of the Roman Republic. They stabbed Caesar to death in the Theatre of Pompey on the Ides of March (15 March) 44 BC.

Total Pages
3 pages
Answer Key
Does not apply
Teaching Duration
N/A
Report this Resource to TpT
Reported resources will be reviewed by our team. Report this resource to let us know if this resource violates TpT’s content guidelines.