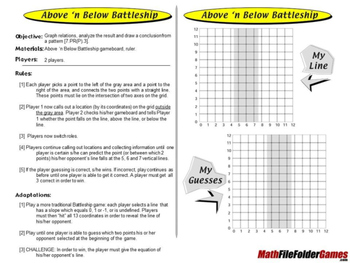 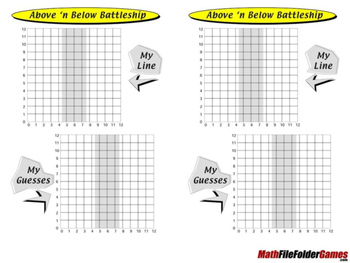 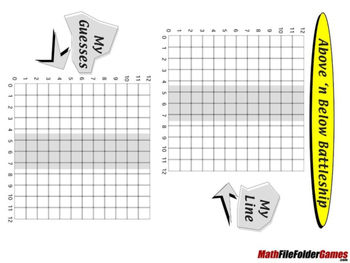 The Above 'n Below Battleship game gives kids a chance to work with a coordinate graphing system using a fun and exciting new spin. The first player picks two points on the grid that represent the path of his battleship. The second player doesn't see the points that are picked. As if they were sending signals to each other in the fog, the first player gives the second player a coordinate point that does NOT lie on the #5, 6, 7 zones.

The second player has to venture a guess as to whether she thinks that point lies directly on the battleship path or is above or below it. Once the second player declares where she thinks the point is in relationship to the path by making a guess, then the first player must verify whether the guess is correct or incorrect. Then they switch and the second player gives clues to the first player about her battleship. Over time the hot/cold aspect of the clues received about the location of the opponent's battleship helps the players pinpoint the ships' locations.


(Get all 42 Middle School Math Games here on TPT and save!!!)
Total Pages
Answer Key
N/A
Teaching Duration
N/A
Report this Resource to TpT
Reported resources will be reviewed by our team. Report this resource to let us know if this resource violates TpT’s content guidelines.