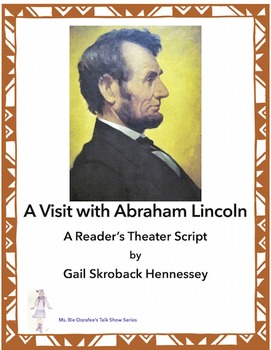 Use this informative Reader's Theater Script to learn about Abraham Lincoln. The fun/informative play uses the format of Abraham Lincoln being a guest on a talk show and the studio audience asks questions about his life. Part of my Ms. Bie Ografee's Talk Show Series.


You may also like the following:
1. Webquest on Abraham Lincoln:
Learn about Abe Lincoln with this informative web quest! President Lincoln started our national Thanksgiving holiday. Did you know that Abraham Lincoln didn't like the name Abe and even his wife called him, Lincoln?Skills include:reading for information and using research/computer skills. Extension activities for Language Arts included, too! Abraham Lincoln, A Webquest

5. Civil War Webquest: On April 12th, 1861 the Civil War began.The long and bloody war that ended in 1865, took the lives of over 600,000 soldiers leaving more than 1,100,000 soldiers injured. Learn about the Civil War with this webquest. Each of the 11 questions have lots of information.I've also included a number of extension activities and resource links. Civil War, A Webquest
Total Pages
9 pages
Answer Key
N/A
Teaching Duration
40 minutes
Report this Resource to TpT
Reported resources will be reviewed by our team. Report this resource to let us know if this resource violates TpT’s content guidelines.