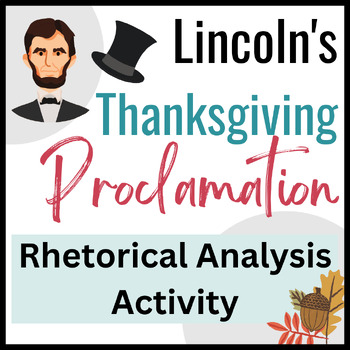 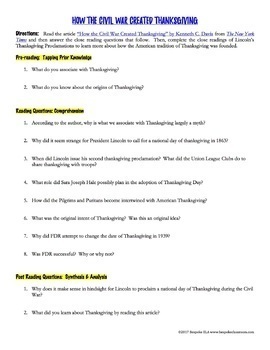 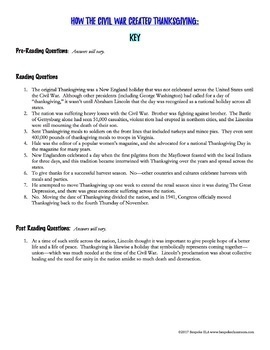 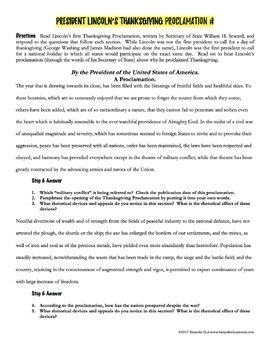 In this Thanksgiving activity by Bespoke ELA, students will study Lincoln's Thanksgiving Proclamations in order to assess the relationship between language and persuasion while targeting the Common Core.

First, students will read an editorial from The New York Times in order to understand better the relationship between Abraham Lincoln and Thanksgiving. Then, they will analyze the rhetoric of Lincoln's two Thanksgiving Proclamations-- from 1863 and 1864.

Thanksgiving became a national holiday as the result of the Civil War. While other presidents had called for a day of "thanksgiving," it was not nationalized as an American holiday until Lincoln saw the need to unite the nation as our country was being ravaged by war. The article from The New York Times also reveals how Thanksgiving had nothing to do with pilgrims and Indians but later became intertwined with the "Founders Day Celebration" of New England. Originally, Thanksgiving came from our leaders' desire to recognize progress in our country.

As a final step in this activity, students will write their very own Thanksgiving Proclamations including rhetorical devices and appeals to entreat their audience to adopt Thanksgiving using their own reasons to be thankful.

Great activity for grades 9-12, including Honors and Advanced Placement.

Screenplay Unit: Screenwriting in Secondary ELA-- From Script to Screen

Nonfiction Practice with The Gettysburg Address

Nonfiction Practice with The Declaration of Independence

Editing the Essay for "Academese"

The Conclusion Paragraph for Literary Analysis

The Body Paragraph for Essay Writing

The Thesis Statement for Literary Analysis: SIX Mini-lessons for Success

The Introduction Paragraph for Literary Analysis