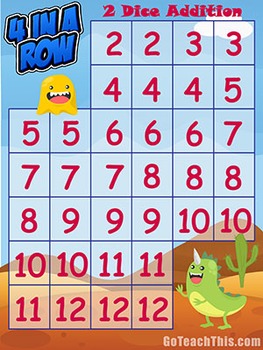 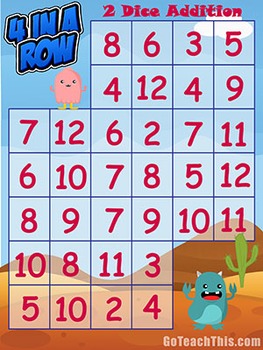 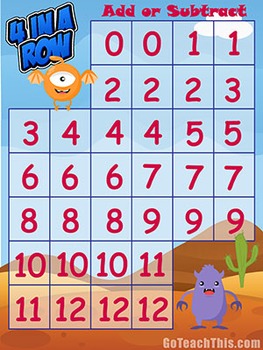 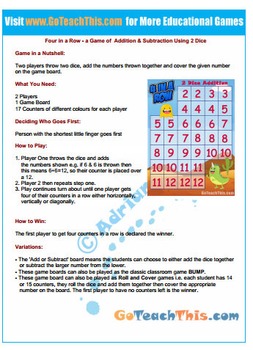 Addition Game - Subtraction Game : This Addition &/or Subtraction Four in a Row Game is great for exploring Early Math Concepts. It makes an an excellent Math Center game.

Game in a Nutshell:

Two players throw two dice, add the numbers thrown together and cover the given number on the game board.

1. Player One throws the dice and adds the numbers shown e.g. if 6 & 6 is thrown then this means 6+6=12, so their counter is placed over a 12.
2. Player 2 then repeats step one.
3. Play continues turn about until one player gets four of their counters in a row either horizontally, vertically or diagonally.

The first player to get four counters in a row is declared the winner.

- The 'Add or Subtract' board means the students can choose to either add the dice together or subtract the larger number from the lower.
- These game boards can also be played as the classic classroom game BUMP.
- These game board can also be played as Roll and Cover games i.e. each student has 14 or 15 counters, they roll the dice and add them together then cover the appropriate number on the board. The first player to have no counters left is the winner.

- Be sure the students have a thorough understanding of what Addition is. e.g. put with, added to, altogether etc
- Plenty of modelling of subitizing. See it Say it.
- Teacher models using math facts to solve the addition algorithms presented by the dice.
- Model how counting on is very effective at finding the answer it is just a bit slow. Have students aim to use basic facts.
- Children love big and novel words so introduce the word 'subitizing', what it means and why the skill is useful. I do not expect them to remember the word or use it, it is just nice to celebrate our language and know we have technical words for a lot of things :)
- Children 'Think, Pair Share' where they are at with subitizing with dice. Can you see the pattern and then say the number shown or do you have to count the dots? Can you look at both dice and know the answer or do you have to count the dots?
- Children record where they are at with subitizing and write a goal to achieve by the end of the game playing time.

- Teacher monitors and questions students re their use of subitizing. Make lists of students who need a tutorial on the concept.
- Encourage subitizing as an effective and efficient strategy to make the game flow.

Possible Self Reflection for After the Game:

Please Note: This game is included in my MEGA BUNDLE! - The package includedsALL the Math and Literacy games currently in my store PLUS every resource I create for the next YEAR for FREE!!! It's like a great classroom resource that just keeps on giving. :-)
CLICK HERE to see the Mother Load :-)
Total Pages
5 pages
Answer Key
N/A
Teaching Duration
Lifelong tool
Report this Resource to TpT
Reported resources will be reviewed by our team. Report this resource to let us know if this resource violates TpT’s content guidelines.