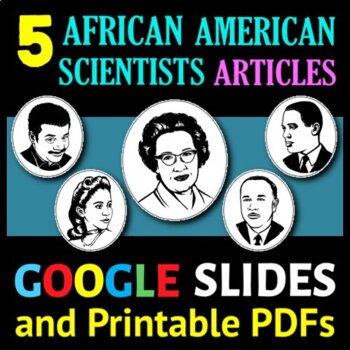 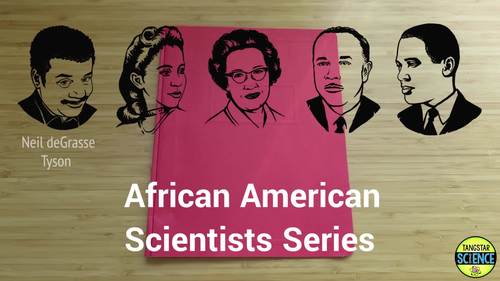 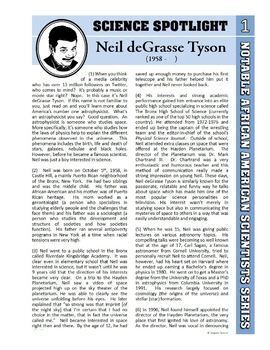 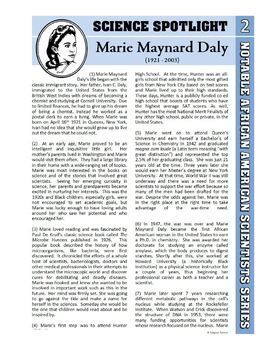 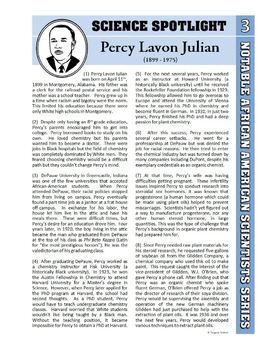 (96 MB|15 pages)
5 Products in this Bundle
5 products
Bonus
1 file
How to Get Free Products on TPT
Also included in:
Bundle Description

The contributions of African American scientists are not widely known nor are they often taught to students. This Notable African American Scientists Articles Series provides teachers with five articles to help teach the amazing contributions African American scientists have made to science. Prepare for your students to be surprised and inspired. These articles are great to use any time of the year but will also make a well-timed reading for Black History Month. Purchased individually, each article in this series costs $3.39. This bundle gives you a discount of over 25% on each article bringing the price down to $2.50 per article. PLEASE CLICK ON THE PREVIEW to read excerpts of the articles in this bundle or the VIDEO PREVIEW to see this resource in action.

✿ The Holiday Science BUNDLE contains this bundle as well as resources on Thanksgiving, Christmas, Halloween, Valentine's Day and Earth Day for 35% OFF.

SUMMARY OF THE ARTICLES IN THIS BUNDLE

He is one of America’s most well-known scientists and astrophysicists. His numerous appearances on radio, talk shows as well as stints hosting his own science shows have made him a well recognized figure. His love of astronomy was ignited when he visited the Hayden Planetarium as a child. By the age of 17 he was giving enthusiastic public lectures on different topics about space. His ability to spark curiosity about science in the average American has earned him much praise and recognition. In 2015, Neil won the prestigious Public Welfare Medal for his “extraordinary role in exciting the public about the wonders of science.”

She was the daughter of immigrants. Her father had a dream of coming to the United States and becoming a chemist but lack of funding and opportunities prevented him from achieving his dream. Marie was luckier and was able to do what he could not. However, it wasn’t easy. In the 1920s, Black girls were not expected to aspire to science or academia, but this is what Marie wanted the most. She had become inspired by reading books about famous scientists and wanted to be one herself one day. She was the first Black woman to earn a PhD in chemistry in the United States.

He was born in Montgomery Alabama in 1899. Growing up, racism and bigotry were the norm, but Percy had great aspirations. He wanted to be a research chemist. In university, he graduated at the top of his class and was the valedictorian. After graduating though, he faced a lot of obstacles trying to get work despite being an excellent organic chemist. Eventually he found himself in Europe where there was less racial discrimination. This is where he earned his PhD. Coming back to America, he obtained work and was able to develop innovative techniques for creating human steroid hormones (like testosterone and estrogen) from plant oils. Until then, no one had figured out a way to mass produce these hormones for the medical market.

She was born in 1918 in West Virginia. She demonstrated remarkable mathematical abilities at a very young age and started university at the tender age of 14. She delighted her professors who designed new math courses just to challenge her. Katherine had dreams of becoming a research mathematician after graduating, but even with her extraordinary mathematical mind, there were very few opportunities for women of color to go into such an elite field. Eventually she would get hired at NASA as a human “computer”. She worked behind the scenes calculating trajectories and launch windows for the most important space missions in history. Her mind rivaled that of the computers used to calculate flight paths. She is considered one of the most brilliant mathematical minds to have worked at NASA. Her life has also been celebrated in the 2016 movie Hidden Figures.

He was born in South Carolina in 1883. Raised by a single mother who believed in and supported his education, he went on to excel in his studies. When he graduated from Dartmouth College, he was the only Black student in his class of 287. He was at the top of his class and had won almost all of the prizes and honors. He focused his scientific research on marine biology. More specifically, he was interested in how the cell surface played a role in embryo development. As a researcher, he developed a national reputation for being a genius at experimental design and his techniques and skills were highly sought out by other researchers. Despite his exemplary credentials, many teaching and research opportunities were not offered to him due to racial discrimination. For this reason, he spent the last decade of his life doing research in Italy, France and Germany where he was welcomed with open arms into some of the most important research institutes in Europe.

Total Pages
15 pages
Answer Key
Included
Teaching Duration
3 hours
Report this Resource to TpT
Reported resources will be reviewed by our team. Report this resource to let us know if this resource violates TpT’s content guidelines.