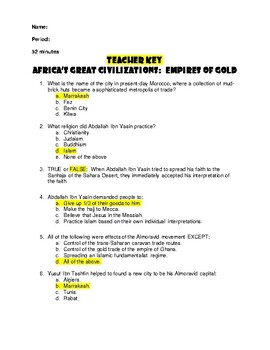 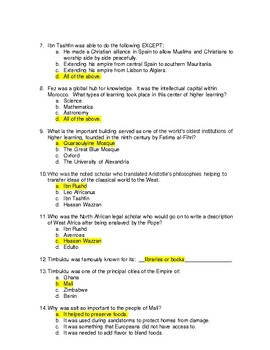 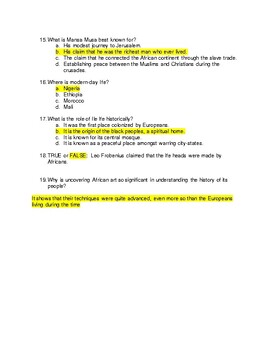 This is a 18 question multiple choice movie guide with 1 short answer. A key on Africa's Great Civilizations Series, Episode 3 is provided for easy grading. This episode is excellent to use in classes to educate students on the advanced empires that emerged in North and West Africa. This documentary highlights civilizations in North and West Africa such as Morocco, Mali, Ghana, and Nigeria. It focuses extensively on the influence of trade in addition to the cultural exchange that took place between other civilizations. It also emphasizes how many of these cities experienced a golden age and lived in luxury and extravagance, dispelling myths that Europe was the only place in the world to experience a renaissance. I use this in my class as a comparison between the Middle Ages of Europe and the flourishing of African civilizations at this time.

A synopsis of episode 3:

The third hour in the series marks an era of great commercial and manufacturing growth throughout several regions on the continent. It begins with the revolutionary transformation of North and West Africa.

Strolling the streets of the Medina of Marrakesh in present-day Morocco, a walled city within the city, host Henry Louis Gates, Jr. explains how a collection of mud-brick huts became a sophisticated metropolis of trade in the 11th century through the story of Abdallah Ibn Yasin, a Muslim Berber. Ibn Yasin sought to bring the teachings of his faith to the Sanhaja of the Sahara Desert. When faced with resistance, he withdrew and traveled across the Sahara to found the Almoravid ("the people of the frontier fortress") movement.

In recounting how the Almoravids were overthrown by the wide-spanning Almohad empire less than a century later, Gates visits the Almohad city of Fez, a major network of exchange founded in 789. Here, Islamic scholarship reached new heights at its numerous educational institutions, known in Arabic as Madrassas, and its famous Quaraouiyine mosque. This mosque and university was founded in the ninth century by Fatima al-Fihri, the daughter of a wealthy merchant who migrated to Fez from the then Tunisian capital city of Qairouan. Thus named after her ancestral home, the Quaraouiyine is arguably the world's oldest institution of higher learning, where the sciences and mathematics were taught, as well as principles of rhetoric, logic and theology. Among the historical scholars of Fez to whom Gates introduces viewers are Ibn Rushd (also known by his Latinised name, Averroes), an Arabic interpreter of Aristotle whose writings were translated into Latin, and Hassan Wazzan (or Leo Africanus), a North African legal scholar who would go on to write a description of West Africa after being enslaved to the Pope.

The film next takes us 1,200 miles south of Fez to Timbuktu, an equivalent capital of learning in the 13th and 14th centuries. Timbuktu's principal educational accomplishments include its famed Sankore Mosque and the local development of some of the world's most precious libraries, as the city housed hundreds of thousands of books, many written by African authors. Timbuktu was one of the principal cities of the Empire of Mali, founded in the 13th century by the legendary warrior king, Sunjata, who grew his provincial kingdom into the largest state that has ever existed in West Africa. While the trans-Saharan trade of salt, slaves and other wares kept North and West Africa connected, the Empire of Mali controlled the Western Sudan through its supply of gold. No single emperor symbolized its dominant economic position more than Mansa Musa, who embarked on a most lavish pilgrimage to the Muslim Holy City of Mecca in 1324 and whose legacy includes the claim that he was the richest man who ever lived.

Gates concludes this hour in modern-day Nigeria, site of another great civilization known as Ife or Ile Ife, which traded with the Empire of Mali. There, he studies the kingdom's sublime sculpture at the National Museum in Lagos and interviews the Nigerian writer and Nobel Laureate, Wole Soyinka, who reflects on the Yoruba connections to Ile Ife, which Yoruba people regard as their spiritual capital.