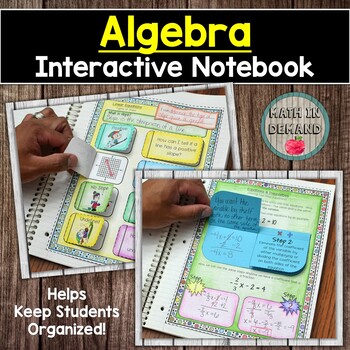 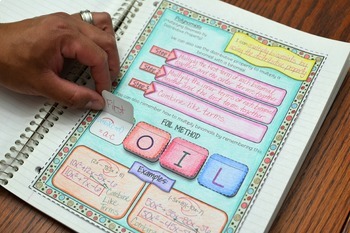 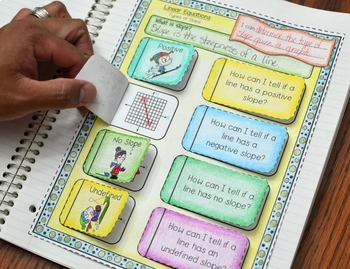 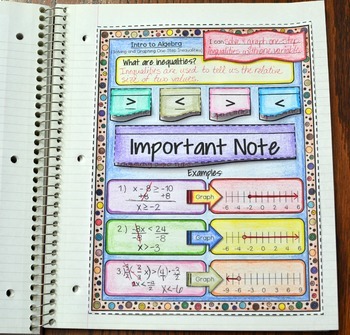 There are a total of 10 units that include:

Unit 3 - Features of a Function

Unit 7 - Solving and Graphing Systems of Equations and Inequalities

There are two pages for each concept. The first page is used for direct instruction (notes) and the second page is for students to practice the concept. The first page includes a "I can..." statement and the second page includes an area where students can rate themselves on how well they understand the concept. This allows students to look back in their interactive notebook before a test and know which concept they need to study. There are some pages that have foldables.

The complete break down for each unit is given below:

• Use Order of Operations to Simplify Expressions

• Define and Apply the Absolute Value

• Solve Equations with Variables on Both Sides involving One Variable

• Use Proportions to Solve for an Unknown

• Plotting Points on the Coordinate System

• Determine Slope Given a Graph

• Determine Slope Given a Table or Two Points

• Determine a Linear Equations Given a Table

• Determine Linear Equations Given a Graph

• Determine and Graph the X and Y intercepts Given an Equation

• Write Equations of a Line Given a Slope and a Point, or Two Points

• Write Parallel and Perpendicular Lines Given an Equation

-- Unit 7: Solving and Graphing Systems of Equations and Inequalities

• The Three Types of Solutions: No Solution, Infinitely Many Solutions, and One Solution

• Solving Systems of Equations by Graphing, Substitution, and Elimination

• Solve and Graph Systems of Linear Inequalities involving One Variable

• Intro to Quadratics: What is a quadratic?

• The Quadratic Formula to Solve for Roots

• Using the Completing the Square to Solve for Roots

• What is a radical?

The interactive notebook does not include my wheel foldables.