Alphabet Activities FREEBIE Would You Rather Graphing Activities Opinion Writing 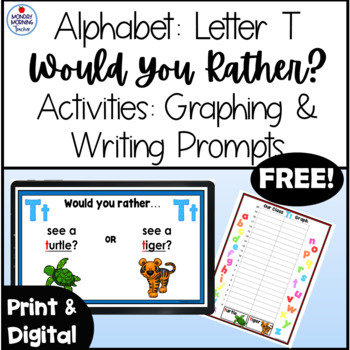 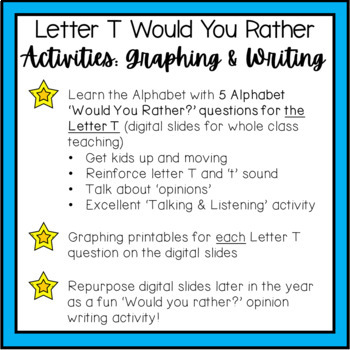 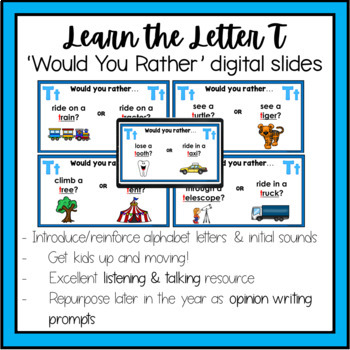 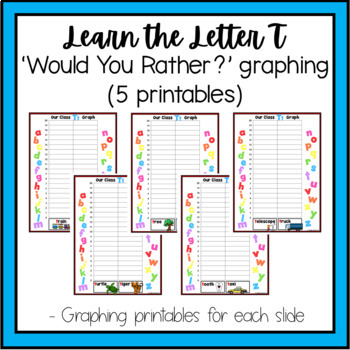 Monday Morning Teacher
636 Followers
Follow
Made for Google Drive™
This resource can be used by students on Google Drive or Google Classroom. To access this resource, you’ll need to allow TpT to add it to your Google Drive. See our FAQ and Privacy Policy for more information.
DescriptionStandards13ReviewsQ&A

This Alphabet activities FREEBIE is an alphabet resource that gives you a 3 in 1 set of alphabet activities for the letter Tt. It includes 5 Alphabet 'Would You Rather?' questions on digital slides for the Letter T, as well as alphabet graphing activity printables to allow you and your class to graph their 'Would you rather?' Letter T choices. After your class has gained confidence with the alphabet, and they have moved on to building words and sentences, these alphabet Letter T digital slides make excellent early opinion writing activities, as children write about their alphabet 'Would you rather?' choices. So this resource is 3 activities in 1 for the letter T, with alphabet 'Would You Rather?' activities, alphabet graphing activities, then eventually alphabet opinion writing prompts.

This resource is a FREE sample of my complete Alphabet resource, which contains all of the above activities for each letter of the alphabet

The 5 alphabet 'Would you rather?' digital slides (made for Google slides) can be used in a single session to introduce or reinforce an alphabet letter and initial sounds (it's a great activity to get kids up and moving), or you can choose to use one 'Would you rather?' alphabet activity each day at the beginning or end of your alphabet lesson. Used daily, rather than all at the same time, these alphabet activities can make great talking and listening prompts if you give your class the time and space to discuss their choices and their reasons for their choices.

If you choose to add in the alphabet graphing by graphing your class's Would You Rather? choices, you maximize instructional content without adding much instructional time, which is always in short supply.

Giving your class experience of a fun, daily alphabet graphing activity will pay huge mathematical dividends, as children are exposed to daily counting (into the teens), as well as daily graphing. You can also extend the mathematical input by introducing the often tricky idea of 'How many more children liked 'x' option compared to 'y' option). This works well to develop numeracy skills through short, repetitive, daily activities, especially if you are also using 'Count the Days of School' with your class (see my FREE Count the Days of School resource to get started with that routine).

In this resource, you will receive:

NOTE: in the complete alphabet resource, the graph printables come in 4 versions, so you can choose which option works best for you:

The complete Alphabet 'Would You Rather?' resource can be found here:

Alphabet Would You Rather?

Other alphabet and early number activities you may find useful:

Don't forget to leave feedback! Your feedback helps other teachers to find this free resource.

Log in
to see state-specific standards (only available in the US).
CCSSK.CC.A.1
Count to 100 by ones and by tens.
CCSSK.MD.B.3
Classify objects into given categories; count the numbers of objects in each category and sort the categories by count.
CCSSRF.K.1a
Follow words from left to right, top to bottom, and page by page.
CCSSRF.K.1b
Recognize that spoken words are represented in written language by specific sequences of letters.
CCSSRF.K.1d
Recognize and name all upper- and lowercase letters of the alphabet.