Alphabet Centers and Activities for Pre-K and Kindergarten 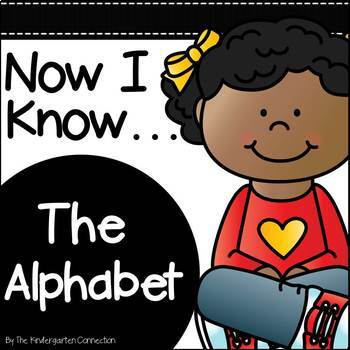 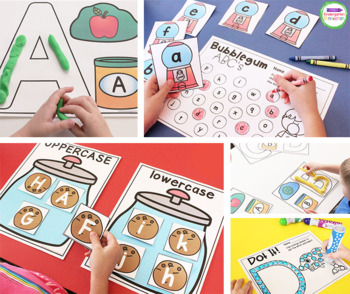 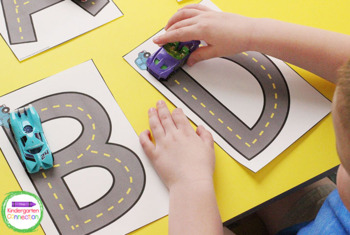 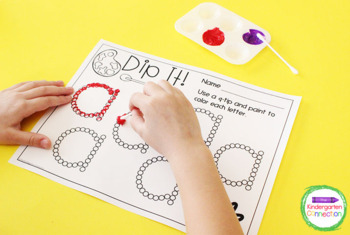 These alphabet centers are perfect for teaching letter identification to Pre-K and Kindergarten students. If you are looking for hands-on and engaging alphabet activities for your classroom - these are for you!

Designed with both Pre-K and Kindergarten in mind, these centers will give you a variety of activities and options for your students.

This pack is filled with engaging alphabet centers for Pre-K and Kindergarten students that are NOT themed and can be used ANY TIME of year! (see the preview and description below for full details).

***This pack focuses on letter NAMES and not sounds. Our Beginning Sound Centers include letter sound activities.

***This pack is also available in a money saving BUNDLE*** of print and play, skill-based centers.

Looking for centers that are themed? You will love our themed math and literacy centers.

Dip It! Q-Tip Alphabet Sheets- Use a q-tip to paint the dots to form letters. Both upper and lowercase letters sheets included. Don't want to paint? Use crayons to color the circles or stickers instead (great for fine motor!)

Dot it! Bingo Dauber Alphabet Sheets- Use bingo daubers to dot the letters and the beginning sound pictures. Both upper and lowercase sheets are included.

Alphabet Road Racer Letters- Use toy cars to "race" around the letters! The car will show you where to start for letter formation. Both upper and lowercase letters are included.

Dry Erase Alphabet Tracing Strips- Print and laminate the strips and use a dry erase marker to trace! Both upper and lowercase letters are included.

Magnet Letters Sorting Mats – Sort magnets (or letter beads, tiles, any alphabet material) onto the mats by their letter.

Cookie Jar ABC Sort - sort the cookies into the correct jar by placing them in either the “uppercase” jar or the “lowercase” jar.

Monkey Match – Pair the monkeys with their bananas (both upper and lowercase included for each, so you can decide how to play).

Bubblegum ABC's – Pick a gumball machine and say the letter name. Find and color the matching gumball (both upper and lowercase options included.)

Letter Strike! – Pick a bowling ball and read the letter. Find and trace its match (both upper and lowercase options included.)

Stamp It! – Read the letters and stamp their matches in the boxes above (both upper and lowercase pages included.)

Magnet Match – Match up letter magnets to the letters on the sheet. Includes both upper and lowercase pages as well as challenge versions with missing letters.

Pocket Chart Letters – use in the pocket chart as a matching activity, as a table activity, or however you choose!

Black and White Copies of color items are included at the end of the files.

More Activities Your Kids Will Love: