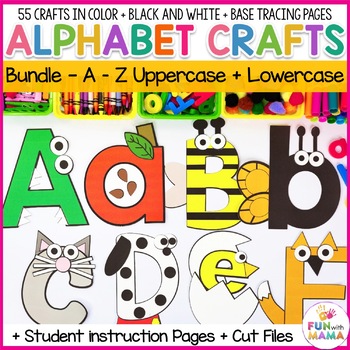 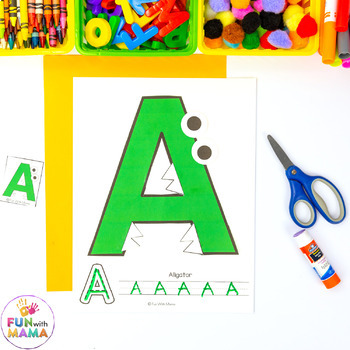 These alphabet crafts for each letter are sure to delight children. Each alphabet craft includes an uppercase and lowercase craft that begins with the letter sound. There is a color copy as well as black and white copy for those who would rather color things in themselves.

Due to the nature of some of the small pieces, it is highly suggested that a parent or teacher cut out the pieces for a younger child or use a Silhouette cutting machine to make the process simpler.

Please note that the alphabet crafts and activities contained in this alphabet bundle include the following two products:

If you already have one of these products do not purchase the bundle. Instead, purchase the missing pack above individually.

The following alphabet crafts cut and paste activities are included:

Letter A crafts include:

- Uppercase Letter A for Alligator

- Lowercase Letter a for apple

Letter B crafts include:

- Uppercase Letter b for bee

- Lowercase Letter b for butterfly

Letter I crafts include:

- Uppercase Letter I for Iguana

- Lowercase Letter i for ice cream

- Letter N is for Night

- Letter N is for Ninja

- Letter O is for Ostrich

- Letter O is for Octopus

- Letter P is for Penguin

- Letter P is for Parrot

- Letter Q is for Quail

- Letter Q is for queen

- Letter R is for Rabbit

- Letter r is for rocket

- Letter S is for snowman

- Letter s is for snake

- Letter T is for Train

- Letter t is for tree

Letter U crafts include:

- Letter U is for Unicorn

- Letter u is for umbrella

- Letter V is for Volcano

- Letter V is for vase

- Letter W is for watermelon (2 versions for different age levels.)

- Letter w is for wagon

- Letter X is for Xylophone

- Letter Y is for yoyo

- Letter Y is for Yak

- Letter Z is for Zebra

- Letter Z is for zip

** I have also included a set of all of these alphabet crafts images in black and white to save on ink.

Students will love coloring these images in with markers, crayons, watercolors, and paint.

As a bonus + added convenience: There are also Silhouette + Cricut cut files for pack 1 + 2 that I've added just in case you want to try using those to save on time. (Please note that if you have any trouble with your cuts, I cannot help you troubleshoot. That would be machine-dependent. ) The cut files for the Silhouette can print and cut in color and black and white. The Cricut Cut files are ONLY cut in black and white. The Silhouette machine performs better for this purpose.