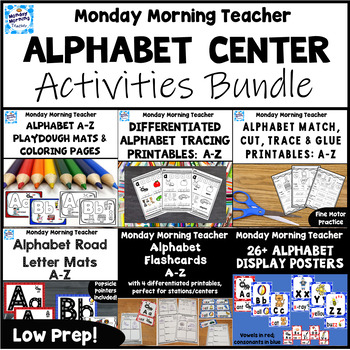 In this bundle, you will receive:

This Bundle contains all of my alphabet activities. Further Kindergarten resources you might find helpful:

These beginning of the year resources are FREE:

Count the Days of School

Don't forget to leave feedback for your purchases. Doing so will earn you TPT credits that you can use to buy more TPT resources.

Log in
to see state-specific standards (only available in the US).
CCSSK.CC.A.1
Count to 100 by ones and by tens.
CCSSK.MD.B.3
Classify objects into given categories; count the numbers of objects in each category and sort the categories by count.
CCSSRF.K.1a
Follow words from left to right, top to bottom, and page by page.
CCSSRF.K.1b
Recognize that spoken words are represented in written language by specific sequences of letters.
CCSSRF.K.1d
Recognize and name all upper- and lowercase letters of the alphabet.