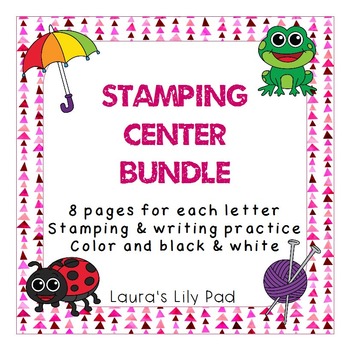 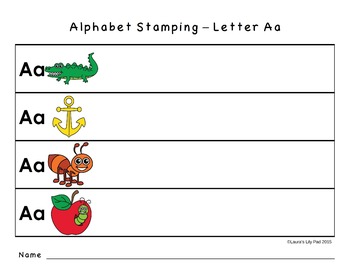 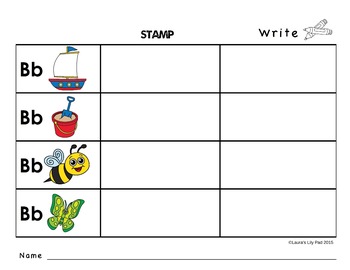 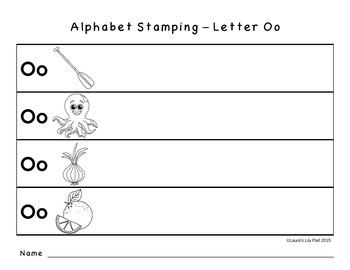 This is an alphabet stamping center bundle that includes stamping sets for all of the letters of the alphabet. The first four sheets are just for stamping, with two in color and two in gray scale. The second set of four have a space for stamping as well as printing the letters.

Use these stamping sheets in your stamping or writing center. I have purchased the Melissa & Doug alphabet stamps, but there are also other stamping sets that may work well.

The sheets for just stamping will involve your student in finding and recognizing the letter and using fine motor coordination to correctly use the stamps to get a clear stamp on the page.

The second type of sheet in this set has a section for stamping and writing the letter. Students can practice finding the correct letter of the alphabet in the stamp set, using the stamp to accurately stamp the letter, and practice printing the letters in both upper and lower case. For the gray scale pages students can also color the words that begin with the letters.

I placed the spot for writing the name at the bottom since some ink may take a while to dry and then get smeared if the student waited until the end to put his name.

There are color and gray scale sheets in this set. The gray scale may also be used to color the pictures for more fine motor skills in addition to saving ink.

Clip art for this set is by Zip-a-Dee-Doo-Dah and Paula Kim Studio. Font is by Krazy About Teaching.

Other sets of stamping sheets will be added to my shop soon. Theme based and mixed practice are planned. If you have any specific requests, please let me know.

This product is also included in the following: